The Chinese zodiac, or shengxiao (/shnng-sshyao/ ‘born resembling’), is a repeating cycle of 12 years, with each year being represented by an animal and its reputed attributes.

Find Your Chinese Zodiac SignChoose your date of birth and find out about your Chinese zodiac sign.

Chinese zodiac animals have lucky meanings. Chinese people associate each animal with certain characteristics. It’s believed that people born in a given year have the personality of that year’s animal. Click the animal signs below to learn more about each zodiac animal.

Each zodiac animal’s year comes around every 12 years, and each year is associated with a zodiac animal. The most recent zodiac sign years are shown below.

Each Chinese zodiac animal has personality traits assigned to it by the ancient Chinese. Chinese people believe these traits will be embodied in people, according to their zodiac sign.

Chinese Zodiac Love Compatibility — Is he/she right for you?

People born in a certain animal year are believed to have attributes of that animal, which could either help or hinder a relationship.

An important use of the Chinese zodiac is to determine if two people are compatible, in a romantic relationship or any kind of relationship.

In ancient times people were faithful to Chinese zodiac compatibility and often referred to it before a romantic relationship began. Even nowadays some people still refer to it.

Enter Your Name, Date of Birth and Test Now 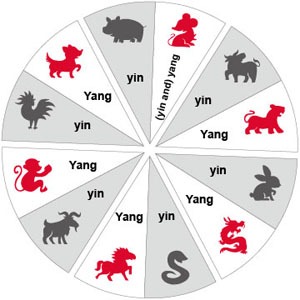 The 12 animals were chosen deliberately, after many revisions. The zodiac animals are either closely related to ancient Chinese people’s daily lives, or have lucky meanings.

Chinese zodiac uses the principles of yin and yang. Since the zodiac animal cycle of 12 is divisible by two, every zodiac sign can occur only as either Yin or Yang.

Get to know Chinese Zodiac story.

As the Chinese zodiac recurs every 12 years, your animal year will come around when you are 12, 24, 36, 48, 60, 72, etc. According to ancient Chinese superstition, in your birth sign year, you will offend the God of Age, and will have bad luck during that year.  Read more on How to be Lucky in Your Zodiac Year.

Chinese Zodiac Hours — Every hour has an animal.

It is widely known that each year is associated with a Chinese zodiac animal, but the animal signs are also assigned to months, days of the week, and hours.

According to professional Chinese astrology, a person’s personality and life is more decided by his/her birth hour than year. Zodiac hours, days, months, and years are used together for in-depth character and destiny analysis. In popular astrology, by contrast, only the birth year is used.

In ancient times, in order to tell the time, people divided a day into twelve 2-hour periods, and designated an animal to represent each period, according to each animal’s “special time, according to an ancient mnemonic and common observations.

Chinese Zodiac Years are based on Chinese lunar calendar

There are two dates a Chinese zodiac year could be said to start on:

Zodiac fortune prediction by birth year is only one of these methods. So you may only take Chinese zodiac birth sign horoscopes as a general reference.