Now, in Beijing, the holes are being bricked up.

Neighborhood by neighborhood, block by block, workers are tearing down unauthorized structures, additions and storefronts as part of a reconstruction effort as sweeping as any since the Olympics in 2008.

The work, which accelerated in the spring, has convulsed entire districts, churning up debris and clouds of dust and wiping out scores of the places that have given the capital a bit of its rakish charm.

Hardest hit have been the old neighborhoods of picturesque, if not always pristine, alleyways known as hutongs. In alley after alley, once-thriving businesses now have bricked-up walls where storefronts or doors once were. 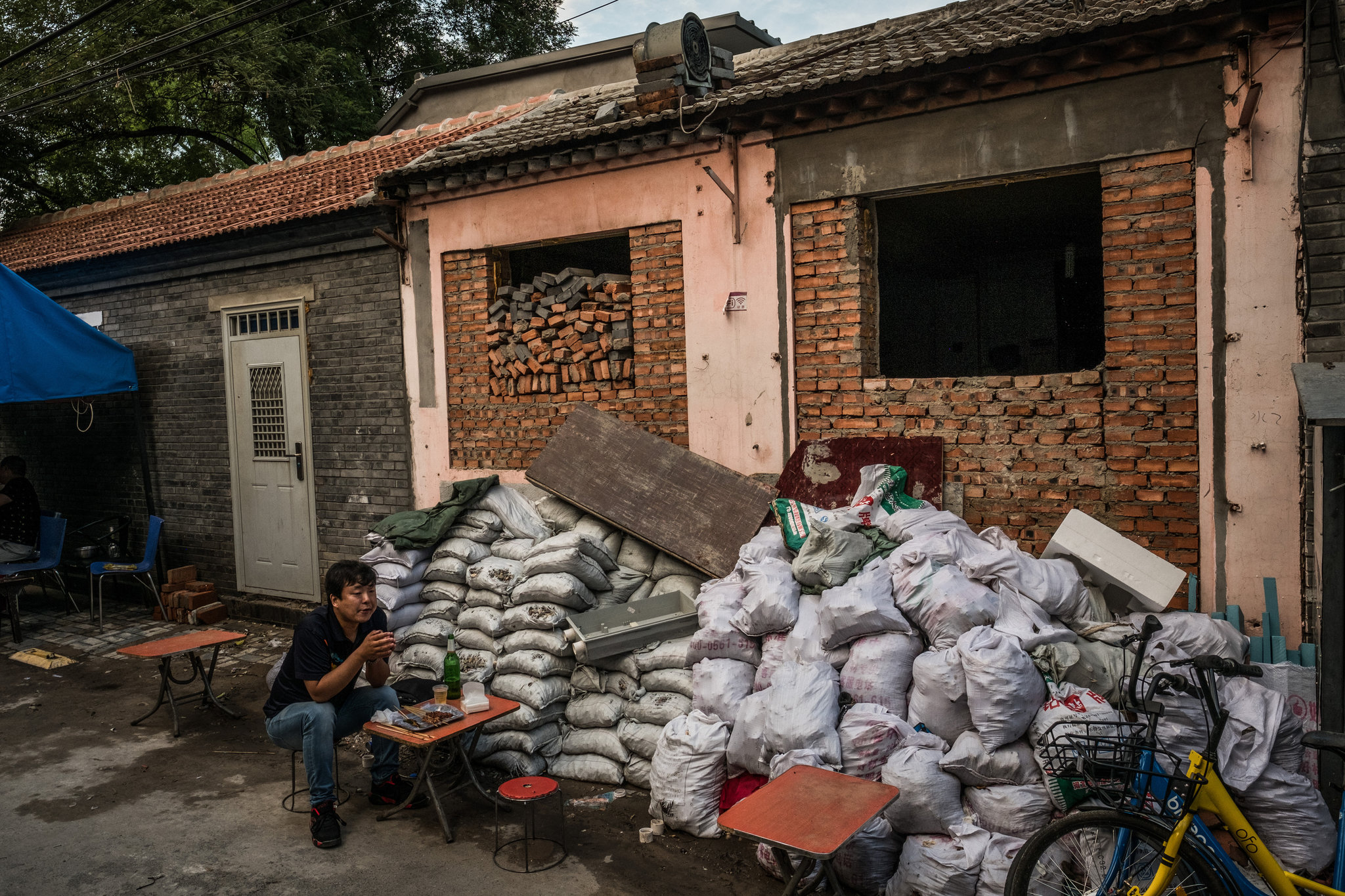 An outdoor diner in Beijing’s Beixinqiao neighborhood. The nearby storefront was bricked up as part of the reconstruction campaign. CreditBryan Denton for The New York Times

Pudao Cottage, a highly regarded bookstore on Mao’er Hutong north of the Forbidden City, shut down after workers bricked over an unapproved glass entrance. Its owner, Zhuo Yifang, wrote an angry post, called “Who murdered a bookstore?” but later removed it. Reached by telephone, he refused to discuss the closing.

“We had all the proper business licenses, hoping that this would save the bookstore,” he wrote on Weibo, a Twitterlike social media site. “But what we didn’t anticipate was a citywide campaign, dragging us into the carnage.”

The city authorities call it a beautification project. And it is, of a sort, in places where white walls, tree boxes and flowering planters have replaced jerry-built, sidewalk-clogging stalls and storefronts.

It is also part of a broader campaign — some say a crackdown — meant to transform Beijing’s bustling, overcrowded city center into a futuristic capital of government, finance, media and technology. That means ridding it of uncontrolled development and “low end” entrepreneurship, while pushing out millions of migrants from other parts of China.

In the Sanlitun neighborhood, Yashow DVD Shop No. 98 survived the destruction that swept through a side street in April, but sales have plummeted since the front entrance facing the street was shuttered. Customers now have to find their way through the grimy courtyard of a six-story apartment block, piled with debris and garbage. 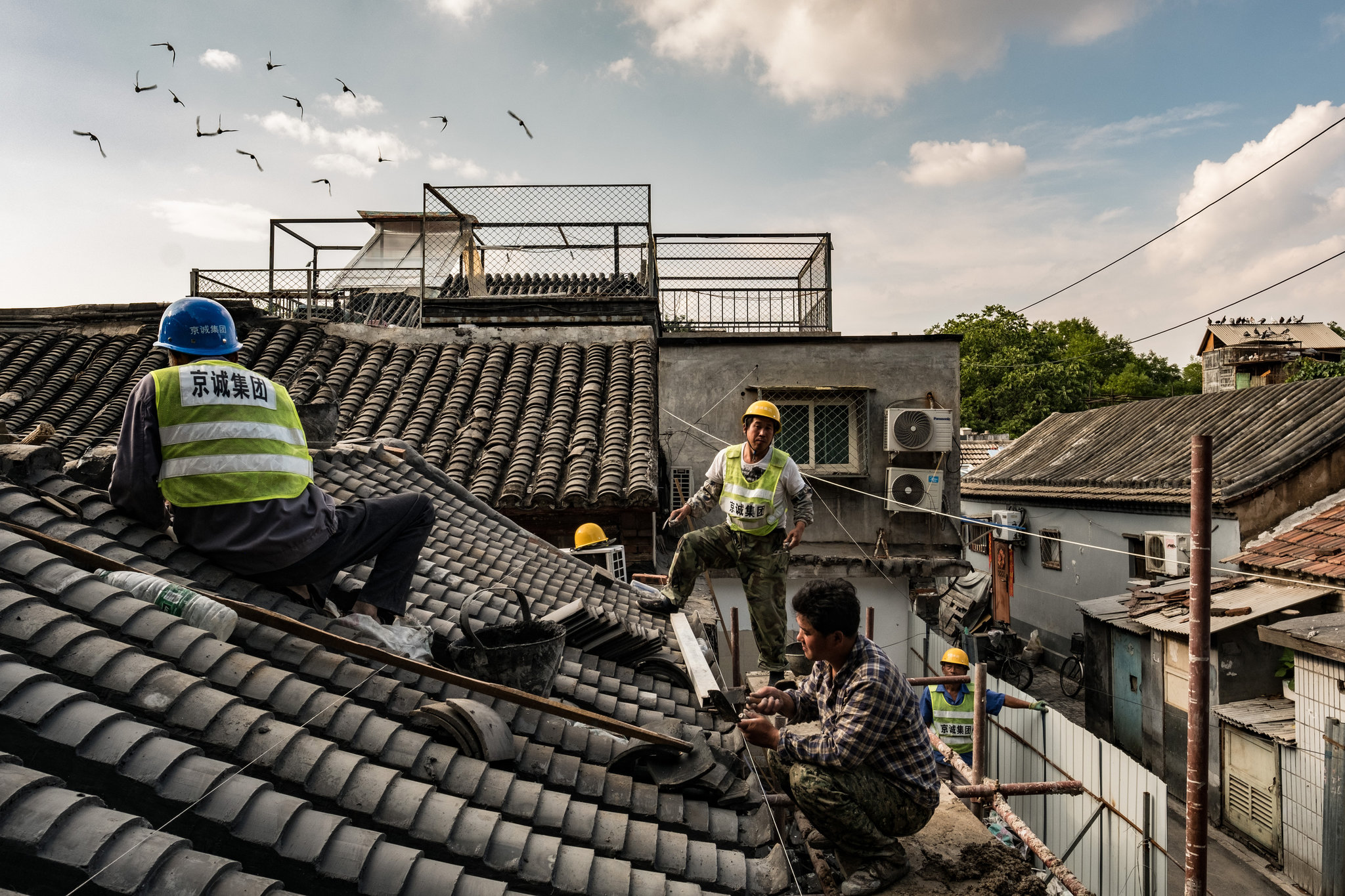 Construction workers repaired the traditional tile roof of a house in the Dongsi neighborhood. CreditBryan Denton for The New York Times

Zhu Yi, whose family opened the shop after moving from the southern city Guangzhou in 2008, said they had been given ample warning of the work. He acknowledged that the storefront entrance, which led to a basement shop, had not been erected according to any zoning code, but rents in nearby shopping centers are too exorbitant.

“To this government it is illegal,” he said, but added that a shop like theirs should also be “a part of Beijing’s local color.”

As with most government decisions in China, there was no public debate about the campaign, and those affected said there was little they could do to challenge it.

It took root in 2014, with President Xi Jinping’s declaration that Beijing would shift its “noncapital” functions to the surrounding regions. The plan would cap the city’s population at 23 million while expanding Tianjin and other nearby cities, linking them all together to create a megalopolis. With an important Communist Party congress coming in the fall, the local authorities have an added incentive to make the city orderly, if not immaculate.

A less explicit goal is to rid the capital of many of the migrants who have poured into Beijing and other principal cities in recent decades. While they were important contributors to China’s economic boom, officials seem to have calculated that they are not as vital to the new phase of development. 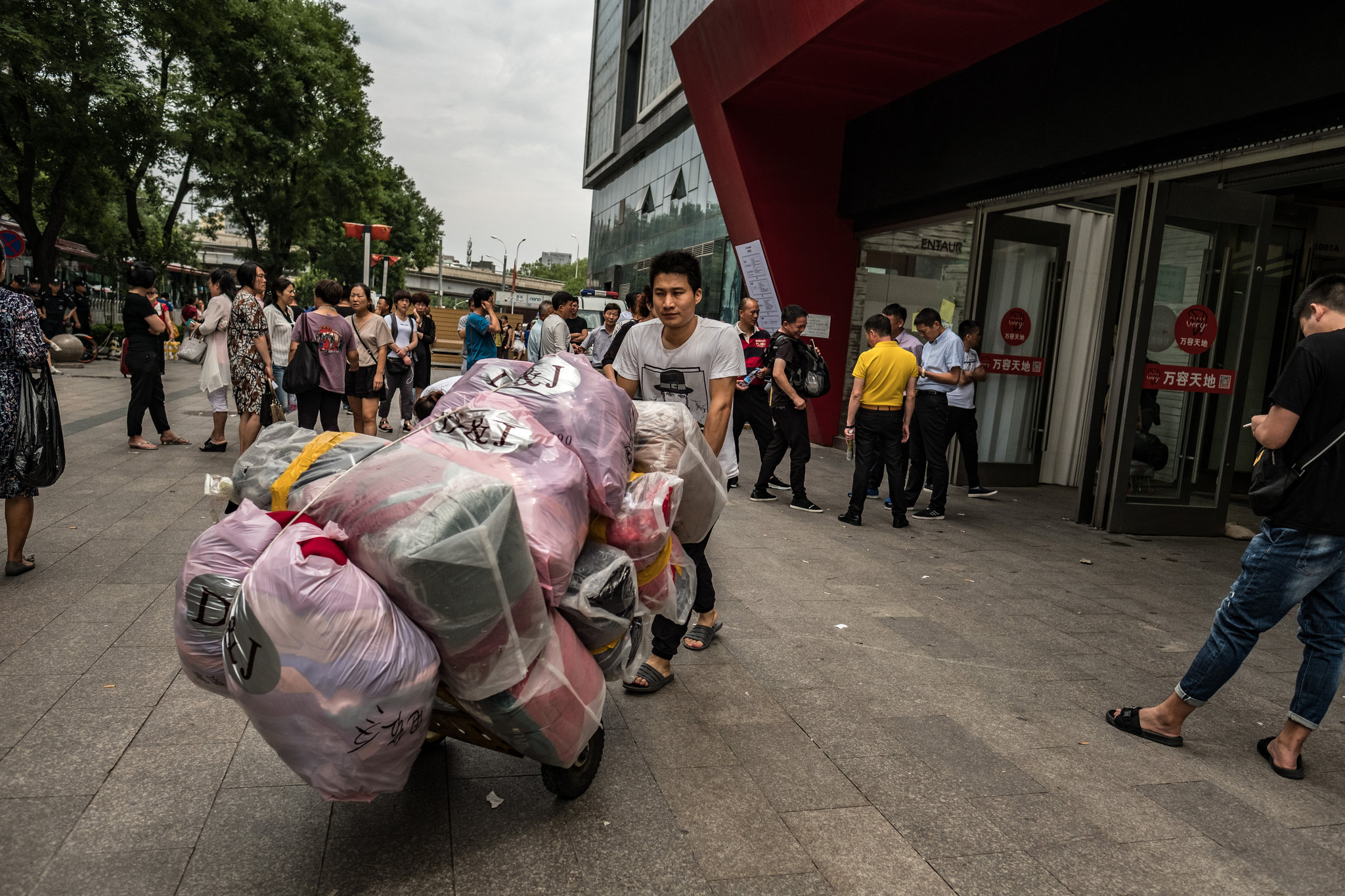 A vendor at a market near the Beijing Zoo. Eviction notices at one of the zoo markets prompted daily protests last month. CreditBryan Denton for The New York Times

The most visible sign of that has been a related campaign to close or shrink dozens of bustling wholesale markets, also heavily populated with migrant entrepreneurs. These include the Alien Street Market, which catered to Russian shuttle traders, and a cluster of buildings near the Beijing Zoo that composed the city’s largest and most famous clothing market.

As with previous efforts to reshape Beijing, this one has torn the fabric of urban life. Eviction notices at one of the zoo markets prompted daily protests last month, at least one of which ended with scuffles between tenants and guards. Dozens of shopkeepers have been promised refunds on their leases, but those protesting said they had yet to see them.

The police, wary as ever of public displays of discontent, moved to stifle the protest before it could draw more attention. (When I showed up the next day, a police officer stopped me within minutes, checked my documents and asked me to leave.)

More evictions are coming. The state-run Xinhua news agency reported that the city plans to close or relocate 120 markets this year.

“We want to reveal the dark side of the cleanup,” said Di Yanjie, one of the shopkeepers who protested. She said she had been detained at the local police station for 12 hours. 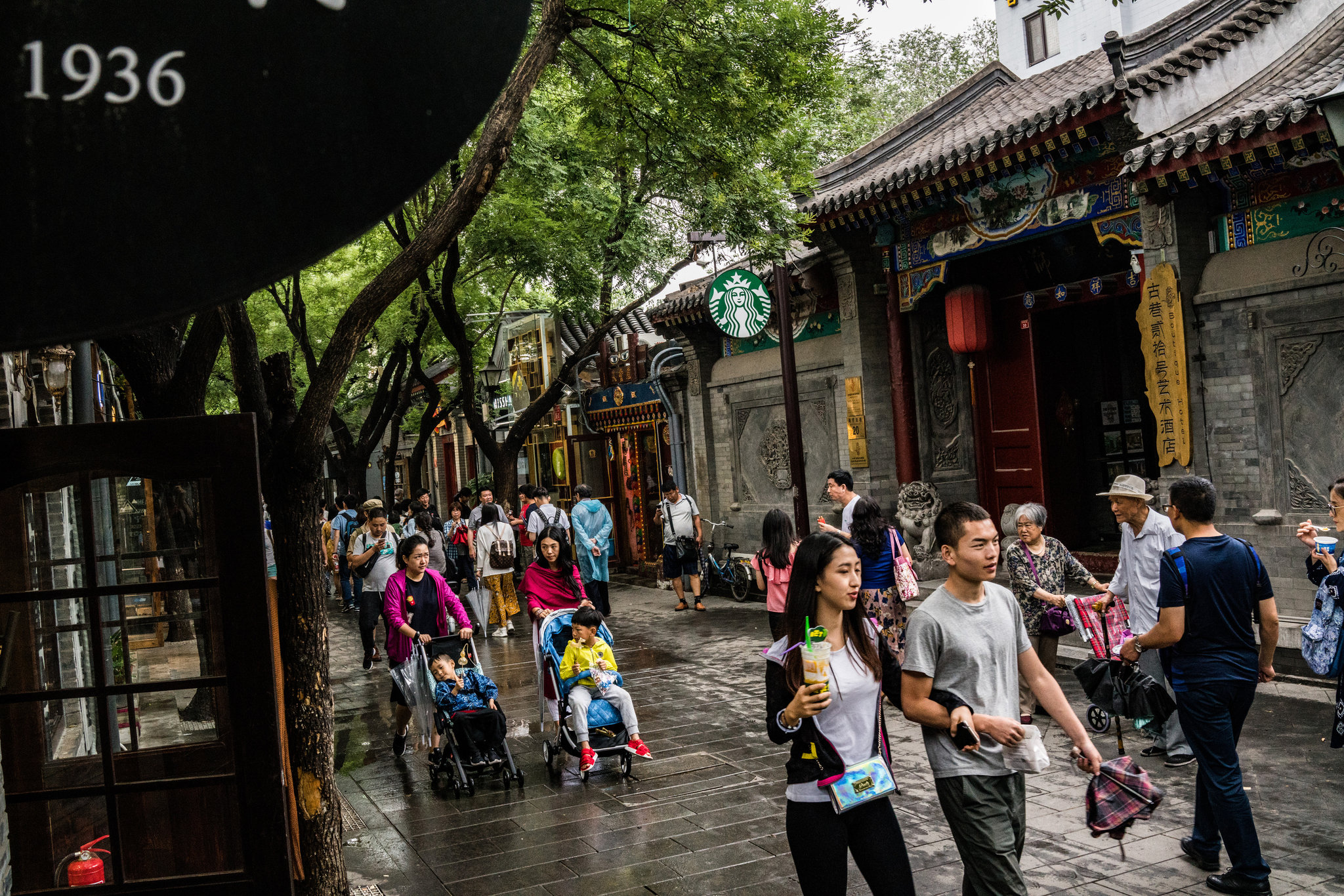 Tourists in Nanluoguxiang, a hutong where brands like Starbucks are changing the atmosphere. CreditBryan Denton for The New York Times

In an interview at a restaurant, beyond the scrutiny of the police, she described the trajectory of her business, one that reflected the extraordinary gains China has made in lifting people into prosperity over the last three decades.

A native of Beijing, Ms. Di and her husband first went into business two decades ago, selling women’s clothing from a blanket on the sidewalk. Over the years they gradually expanded, and in 2009 moved into the market building — which now, according to Xinhua, will be converted into offices for finance and high-tech companies.

“This place is famous all over China — the Beijing Zoo wholesale market!” Ms. Di said. “You could say this place is part of China’s history.”

So, too, were many of those “holes in the wall” in the narrow alleyways that survived Beijing’s past building booms. Increasingly coveted for their traditional character, the hutongs attracted boutiques and restaurants, cafes and even American-style brew pubs that catered to an expanding consumer class.

The “cleanup” campaign has forced scores of those businesses to close or move, while others struggle to make ends meet. One website compiled before-and-after photographs of the losses to the city’s culinary life, particularly in a popular stretch of restaurants and bars along Fangjia Alley, northeast of Tiananmen Square. 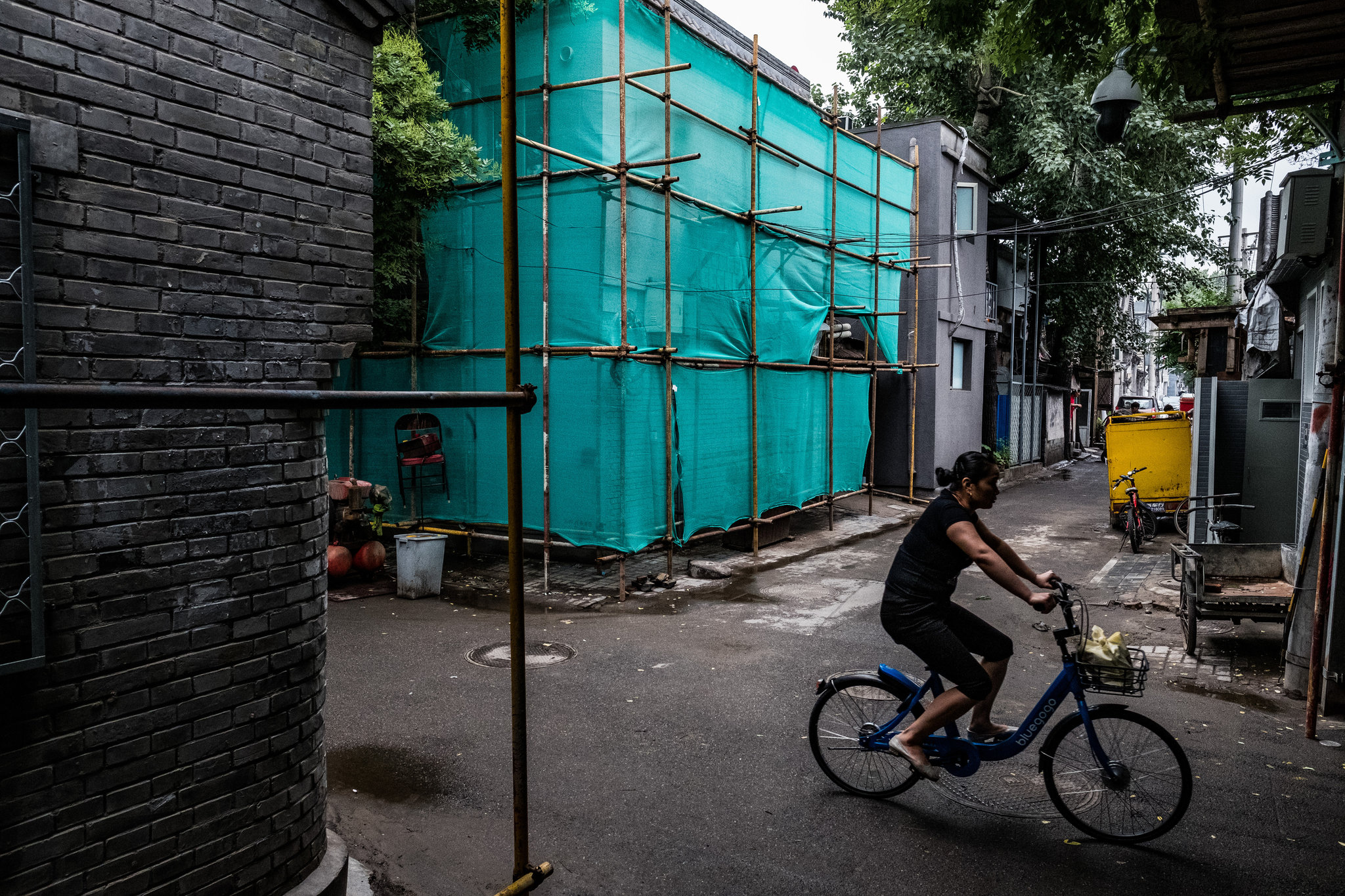 The former site of Slow Boat, a brewpub in the Dongsi neighborhood that was recently shut down because of the reconstruction campaign. CreditBryan Denton for The New York Times

When the municipal authorities announced plans for this year’s construction work, they pledged that it would make the city greener, remove safety hazards and, above all, “improve the people’s sense of achievement.”

And some people interviewed along the affected streets said it had.

One reconstruction effort that drew attention removed a cluster of shops, restaurants and bars along several side streets in the Sanlitun neighborhood. Because of its notoriety as an area for carousing and prostitution, it was known, collectively, as “Dirty Bar Street.” Many cheered its demise on social media when the bulldozers arrived in April.

The work did more than disrupt the night life, though — it removed part or all of 33 shops. The prospects for the owners appear gloomy.

Zhang Lifan, a prominent historian who grew up in the city, said that the disruption of so many small business would change the character of the city, upending lives of migrants and also their customers. He said the government’s efforts were “too simplistic and brutal.”

“I think the move failed to take into account the needs of a lot of people,” he said. “Many of those owners set up their businesses in a legal manner and had invested a lot of money, but now everything they’ve worked for is gone.”