YIXING, China — For most of her life, Shen Ying was disappointed by the world she saw around her. She watched China’s economic rise in this small city in the Yangtze River Valley, and she found a foothold in the new middle class, running a convenience store in a strip mall. Yet prosperity felt hollow.

She worried about losing her shop if she didn’t wine and dine and pay off the right officials. Recurring scandals about unsafe food or tainted infant formula made by once-reputable companies upset her. She recalled the values her father had tried to instill in her — honesty, thrift, righteousness — but she said there seemed no way to live by them in China today.

“You just feel disappointed at some of the dishonest conduct in society,” she said.

Then, five years ago, a Buddhist organization from Taiwan called Fo Guang Shan, or Buddha’s Light Mountain, began building a temple in the outskirts of her city, Yixing. She began attending its meetings and studying its texts — and it changed her life.

She and her husband, a successful businessman, started living more simply. They gave up luxury goods and made donations to support poor children. And before the temple opened last year, she left her convenience store to manage a tea shop near the temple, pledging the proceeds to charity.

Across China, millions of people like Ms. Shen have begun participating in faith-based organizations like Fo Guang Shan. They aim to fill what they see as a moral vacuum left by attacks on traditional values over the past century, especially under Mao, and the nation’s embrace of a cutthroat form of capitalism.

Many want to change their country — to make it more compassionate, more civil and more just. But unlike political dissidents or other activists suppressed by the Communist Party, they hope to change Chinese society through personal piety and by working with the government instead of against it. And for the most part, the authorities have left them alone.

Fo Guang Shan is perhaps the most successful of these groups. Since coming to China more than a decade ago, it has set up cultural centers and libraries in major Chinese cities and printed and distributed millions of volumes of its books through state-controlled publishers. While the government has tightened controls on most other foreign religious organizations, Fo Guang Shan has flourished, spreading a powerful message that individual acts of charity can reshape China.

It has done so, however, by making compromises. The Chinese government is wary of spiritual activity it does not control — the Falun Gong an example — and prohibits mixing religion and politics. That has led Fo Guang Shan to play down its message of social change and even its religious content, focusing instead on promoting knowledge of traditional culture and values.

The approach has won it high-level support; President Xi Jinping is one of its backers. But its relationship with the party raises a key question: Can it still change China?

Fo Guang Shan is led by one of modern China’s most famous religious figures, the Venerable Master Hsing Yun. I met him late last year at the temple in Yixing, in a bright room filled with his calligraphy and photos of senior Chinese leaders who have received him in Beijing. He wore tannish golden robes, and his shaved head was set off by thick eyebrows and sharp, impish lips.

At age 89, he is nearly blind, and a nun often had to repeat my questions so he could hear them. But his mind was quick, and he nimbly parried questions that the Chinese authorities might consider objectionable. When I asked him what he hoped to accomplish by spreading Buddhism — proselytizing is illegal in China — his eyebrows arched in mock amusement.

“I don’t want to promote Buddhism!” he said. “I only promote Chinese culture to cleanse humanity.”

As for the Communist Party, he was unequivocal: “We Buddhists uphold whoever is in charge. Buddhists don’t get involved in politics.”

That has not been true for most of Master Hsing Yun’s life. Born outside the eastern city of Yangzhou in 1927, he was 10 when he joined a monastery that he and his mother passed by while searching for his father, who disappeared during the Japanese invasion of China.

There, he was influenced by the ideas of Humanistic Buddhism, a movement that aimed to save China through spiritual renewal. It argued that religion should be focused on this world, instead of the afterworld. It also encouraged clergy to take up the concerns of the living, and urged adherents to help change society through fairness and compassion.

After fleeing the Communist Revolution, Master Hsing Yun took that message to Taiwan and founded Fo Guang Shan in the southern port of Kaohsiung in 1967. He sought to make Buddhism more accessible to ordinary people by updating its fusty image and embracing mass-market tactics. In sports stadiums, he held lectures that owed more to Billy Graham than the sound of one hand clapping. He built a theme park with multimedia shows and slot machines that displayed dioramas of Buddhist saints.

The approach had a profound impact in Taiwan, which then resembled mainland China today: an industrializing society that worried it had cast off traditional values in its rush to modernize. Fo Guang Shan became part of a popular embrace of religious life. Many scholars say it also helped lay the foundation for the self-governing island’s evolution into a vibrant democracy by fostering a political culture committed to equality, civility and social progress.

Fo Guang Shan expanded rapidly, spending more than $1 billion on universities, community colleges, kindergartens, a publishing arm, a daily newspaper and a television station. It now counts more than 1,000 monks and nuns, and more than one million followers in 50 countries, including the United States. 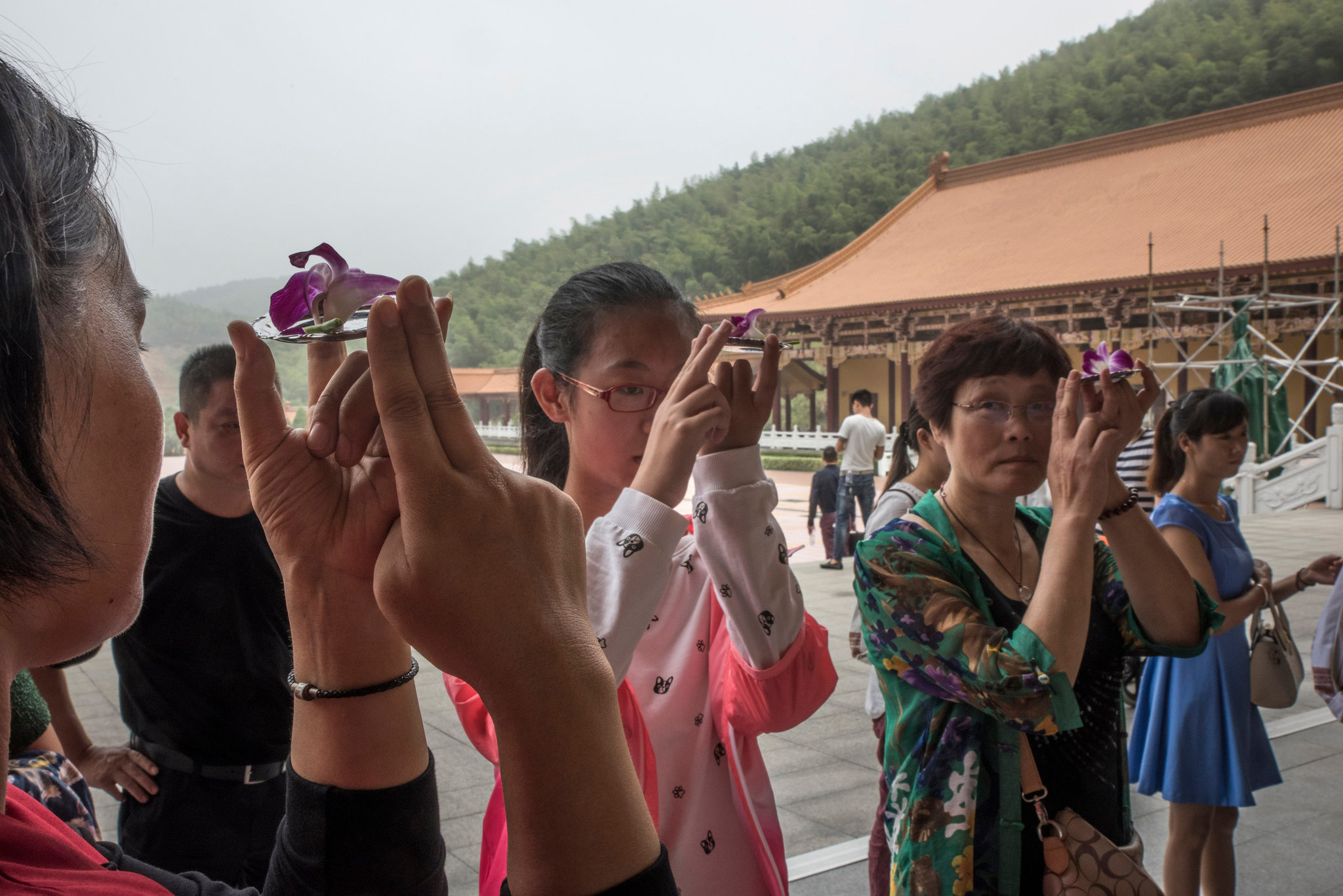 Learning to pray at the Temple of Great Awakening in Yixing. Fo Guang Shan has spent more than $150 million on the facility. CreditGilles Sabrié for The New York Times

But the group declines to offer an estimate of its following in China, where the government initially viewed it with suspicion. In 1989, an official fleeing the Tiananmen massacre took refuge in its temple in Los Angeles. China retaliated by barring Master Hsing Yun from the mainland.

More than a decade later, though, Beijing began looking at Master Hsing Yun differently. Like many in Taiwan of his generation born on the mainland, he favored unification of China and the island — a priority for Communist leaders.

In 2003, they allowed him to visit his hometown, Yangzhou. He pledged to build a library, and followed through a few years later with a 100-acre facility that now holds nearly two million books, including a 100,000-volume collection of Buddhist scriptures, one of the largest in China.

Under President Xi, who started a campaign to promote traditional Chinese faiths, especially Buddhism, as part of his program for “the rejuvenation of the Chinese nation,” the government’s support has grown. He has met with Master Hsing Yun four times since 2012, telling him in one meeting: “I’ve read all the books that master sent me.”

While Mr. Xi’s government has tightened restrictions on Christianity and Islam, it has allowed Fo Guang Shan to open cultural centers in four cities, including Beijing and Shanghai. The organization’s students include government officials, who don gray tunics and trousers and live like monks or nuns for several days, reciting the sutras and learning about Master Hsing Yun’s philosophy.

But unlike in Taiwan, where it held special services during national crises and encouraged members to participate in public affairs, Fo Guang Shan avoids politics in China. There is no mention of civic activism, and it never criticizes the party.

“We can keep the religion secondary but introduce the ideas of Buddhism into society,” said Venerable Miaoyuan, the nun who runs the library in Yangzhou. She describes the group’s work as “cultural exchange.”

“The mainland continues the ideology of ancient emperors — you can only operate there when you are firmly under its control,” said Chiang Tsan-teng, a professor at Taipei City University of Science and Technology who studies Buddhism in the region. “Fo Guang Shan can never be its own boss in the mainland.” 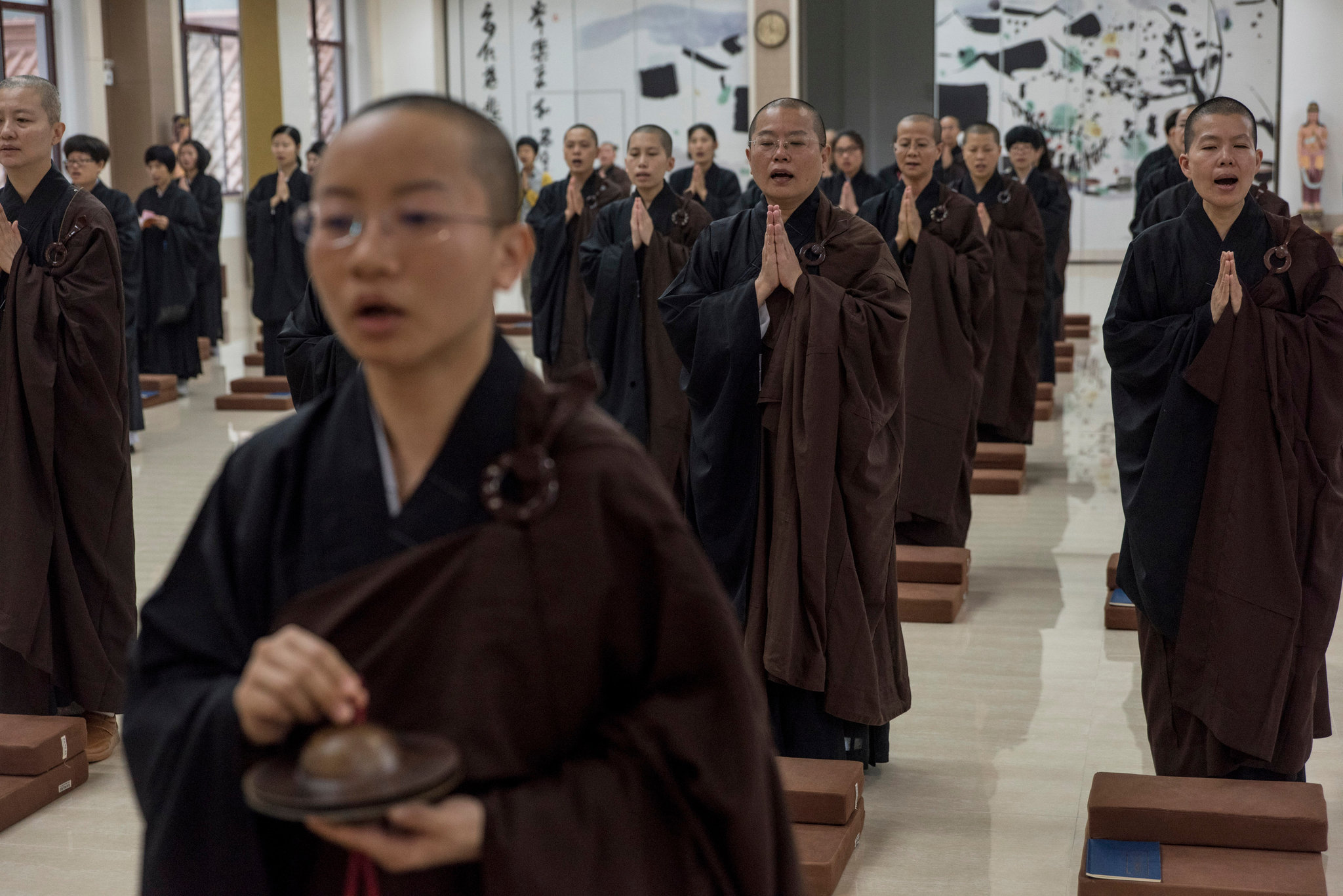 Nuns singing during a class at the Temple of Great Awakening. CreditGilles Sabrié for The New York Times

That limits its influence, but many Chinese express understanding given the reality of one-party rule.

“It certainly cannot promote social service and create associations,” said Hu Jia, a prominent dissident who is Buddhist. “The party certainly would not allow it, so Fo Guang Shan makes compromises. But it is still promoting Buddhism.”

Carved into two valleys of lush bamboo forest, the temple on the outskirts of Yixing features giant friezes that tell the story of Buddha, a 15-story pagoda and a gargantuan 68,000 square-foot worship hall.

Since construction started in 2006, Fo Guang Shan has spent more than $150 million on the facility, known as the Temple of Great Awakening. On a nearby hill, track hoes hack away at trees to make way for a new lecture hall and a shrine to the goddess of mercy, Guanyin. There, the group plans to feature a moving, talking, three-dimensional hologram of the deity.

Unlike most temples in China, it bans hawkers and fortunetellers, and it does not charge an entrance fee. The atmosphere is reflective and solemn, with quiet reading rooms offering books, newspapers, spaces to practice calligraphy, and tea. A stream of visitors from Yixing come for lectures, meals and camaraderie.

The National Day procession along a road to the temple, a two-hour event. CreditGilles Sabrié for The New York Times

Mrs. Shen said that when she took over the tea shop she had a hard time understanding what being a good Buddhist meant. At first, she admitted, she wanted to make more money for the temple by using low-grade cooking oil.

But her husband objected. China is rife with scandals about restaurants using unsafe or cheap ingredients, and he argued that good Buddhists should set a better example.

“This made me realize that faith gives you a minimum moral standard,” Ms. Shen told me. “It helps you treat others as your equals.”

Many followers say they want a cleaner, fairer society and believe they can make a difference by changing their own lives.

Yang Jianwei, 44, a kitchenware exporter who embraced Fo Guang Shan, said he stopped attending the boozy late-night dinners that seem an unavoidable part of doing business in China. “I realize that you might lose some business this way, but it’s a better way to live,” he said.

This idealism is why the authorities support Fo Guang Shan, said Jin Xinhua, an official who helped the group secure the land for the new temple.

“Through its work, Fo Guang Shan is helping the masses,” he said. “We need that sort of thing today.”