Historically, the dragon was associated with the Emperor of China and used a symbol to represent imperial power. The founder of Han dynasty Liu Bang claimed that he was conceived after his mother dreamt of a dragon.During the Tang dynasty, Emperors wore robes with dragon motif as an imperial symbol, and high officials might also be presented with dragon robes. In the Yuan dynasty, the two-horned five-clawed dragon was designated for use by the Son of Heaven or Emperor only, while the four-clawed dragon was used by the princes and nobles. Similarly during the Ming and Qin dynasty, the five-clawed dragon was strictly reserved for use by the Emperor only. The dragon in the Qing dynasty appeared on the first Chinese national flag.

The dragon is sometimes used in the West as a national emblem of China. However, this usage within either the People’s Republic of China or the Republic of China on Taiwan as the symbol of nation is not common. Instead, it is generally used as the symbol of culture. In Hong Kong, the dragon was on the Coat of arms of Hong Kong during colonial time. Now it is part of the design of Brand Hong Kong, a symbol used to promote Hong Kong as an international brand name.

The Chinese dragon has very different connotations to European dragon – in European cultures, the dragon is a firebreathing creature with aggressive connotations, whereas the Chinese dragon is a spiritual and cultural symbol that represents prosperity and good luck, as well as a rain deity that fosters harmony. It was reported that the Chinese government decided against using the dragon as its official 2008 Summer Olympics mascot because of the aggressive connotations that dragons have outside of China, and chose more “friendly” symbols instead.

Sometimes Chinese people use the term “Descendants of the Dragon” (龙的传人) as a sign of ethnic identity, as part of a trend started in the 1970s when different Asian nationalities were looking for animal symbols as representations, for example, the wolf may be used by the Mongols as it is considered to be their legendary ancestor. 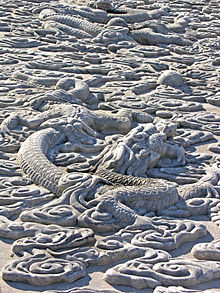 The dragon is the symbol of Chinese emperor in many dynasties. During the Qing dynasty, the Azure Dragon was featured on the first Chinese national flag, until Qing collapsed. It featured shortly again on the Twelve Symbols national emblem, which was used during the Republic of China, from 1913-1928.

Chinese dragons are strongly associated with water and weather in popular religion. They are believed to be the rulers of moving bodies of water, such as waterfalls, rivers, or seas. The Dragon God is the dispenser of rain as well as the zoomorphic representation of the yang masculine power of generation. In this capacity as the rulers of water and weather, the dragon is more anthropomorphic in form, often depicted as a humanoid, dressed in a king’s costume, but with a dragon head wearing a king’s headdress.

According to Chinese legend, both Chinese primogenitors, the earliest Door and the Yellow Emperor (Huangdi), were closely related to ‘Long’ (Chinese dragon). At the end of his reign, the first legendary ruler, the Yellow Emperor, was said to have been immortalized into a dragon that resembled his emblem, and ascended to Heaven. The other legendary ruler, the Yan Emperor, was born by his mother’s telepathy with a mythical dragon. Since the Chinese consider the Yellow Emperor and the Yan Emperor as their ancestors, they sometimes refer to themselves as “the descendants of the dragon“. This legend also contributed towards the use of the Chinese dragon as a symbol of imperial power. 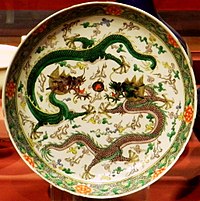 Dragons (usually with five claws on each foot) were a symbol for the emperor in many Chinese dynasties. During the Qing dynasty, the imperial dragon was colored yellow or gold, and during the Ming dynasty it was red. The imperial throne was referred to as the Dragon Throne. During the late Qing dynasty, the dragon was even adopted as the national flag. Dragons are featured in carvings on the stairs and walkways of imperial palaces and imperial tombs, such as at the Forbidden City in Beijing.

The number nine is special in China as it is seen as number of the heaven, and Chinese dragons are frequently connected with it. For example, a Chinese dragon is normally described in terms of nine attributes and usually has 117 (9×13) scales – 81 (9×9) Yang and 36 (9×4) Yin. This is also why there are nine forms of the dragon and there are 9 sons of the dragon (see Classical depictions above). The Nine-Dragon Wall is a spirit wall with images of nine different dragons, and is found in imperial Chinese palaces and gardens. Because nine was considered the number of the emperor, only the most senior officials were allowed to wear nine dragons on their robes — and then only with the robe completely covered with surcoats. Lower-ranking officials had eight or five dragons on their robes, again covered with surcoats; even the emperor himself wore his dragon robe with one of its nine dragons hidden from view.

As a part of traditional folklore, dragons appear in a variety of mythological fiction. In the classical novel Journey to the West, the son of the Dragon King of the West was condemned to serve as a horse for the travellers because of his indiscretions at a party in the heavenly court. Sun Wukong’s staff, the Ruyi Jingu Bang, was robbed from Ao Guang, the Dragon King of the East Sea. In Fengshen Yanyi and other stories, Nezha, the boy hero, defeats the Dragon Kings and tames the seas. Chinese dragons also appear in innumerable Japanese anime movies and television shows, manga, and in Western political cartoons as a personification of the People’s Republic of China. The Chinese respect for dragons is emphasized in Naomi Novik’s Temeraire novels, where they were the first people to tame dragons and are treated as equals, intellectuals, or even royalty, rather than beasts solely bred for war in the West. Manda is a large Chinese dragon that appears in the Godzilla storyline. A golden three-headed dragon also appears in the comic book series God Is Dead.