For Gao Hong, a local businesswoman, such structures are not at all surprising. They were standard features of the Harbin she knew as a child, a city constructed in the late 19th century as a Far Eastern outpost of imperial Russia, a base for the Chinese Eastern Railway in what was once known as Manchuria.

But the two have witnessed something in common: the old architecture being demolished to make room for expanding roads and cookie-cutter high-rise blocks.

“At least a third of these old buildings have disappeared,” Ms. Gao lamented. “The city has changed beyond recognition.” 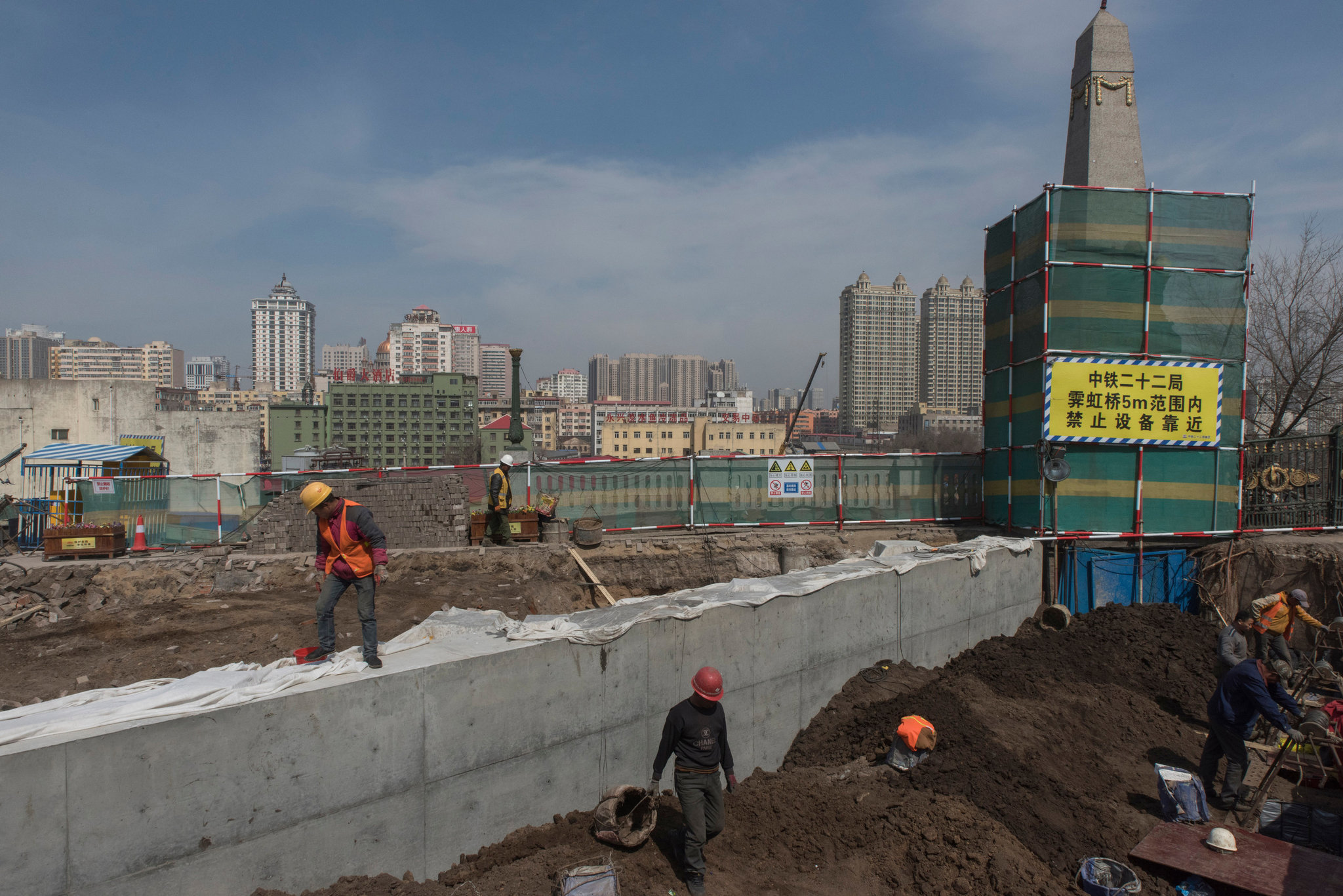 Construction along the Jihong Bridge, which was built in the 1920s. The local government had planned to move the bridge to make way for a new rail line. But under a new plan the bridge will be kept at its site but on a longer and higher span to accommodate the new line. CreditGilles Sabrié for The New York Times

Distressed by the destruction and empowered by social media, Mr. Bu, Ms. Gao and other residents have banded together to preserve what remains of Harbin’s Russian architecture, battered as it has been by waves of war, revolution and, now, urban redevelopment.

One of their current causes is the Jihong Bridge, built in the 1920s by Russian engineers and classified in 2013 as an “immovable cultural relic” by the State Administration of Cultural Heritage, which means any changes must be cleared by the central government.

Last year, when the Harbin city government decided that the bridge would have to be removed to make room for a high-speed rail line, it met with strong resistance from residents. Hundreds signed petitions and thousands wrote comments online calling on the government to abandon the plan. Some hung protest banners on the bridge.

Mr. Bu, now an architecture professor at his alma mater, the Harbin Institute of Technology, drafted a letter last summer, signed by many professors and students, urging the city government to preserve the bridge.

“There’s hardly anyone here in Harbin who doesn’t know the Jihong Bridge,” Ms. Gao said over lunch at Lucia, a Russian restaurant. “So there was a huge backlash because people have incredibly deep feelings about it.”

The State Administration of Cultural Heritage weighed in, too, rejecting the Harbin government’s initial plan to dismantle the bridge and move it to a new location.

“Our attitude was firm,” said Song Xinchao, the administration’s deputy director. “The significance of this bridge is: It is Harbin and its people’s common memory.”

Under the plan that was finally approved, the bridge will be kept at its original site but on a longer and higher span to accommodate the new rail line. 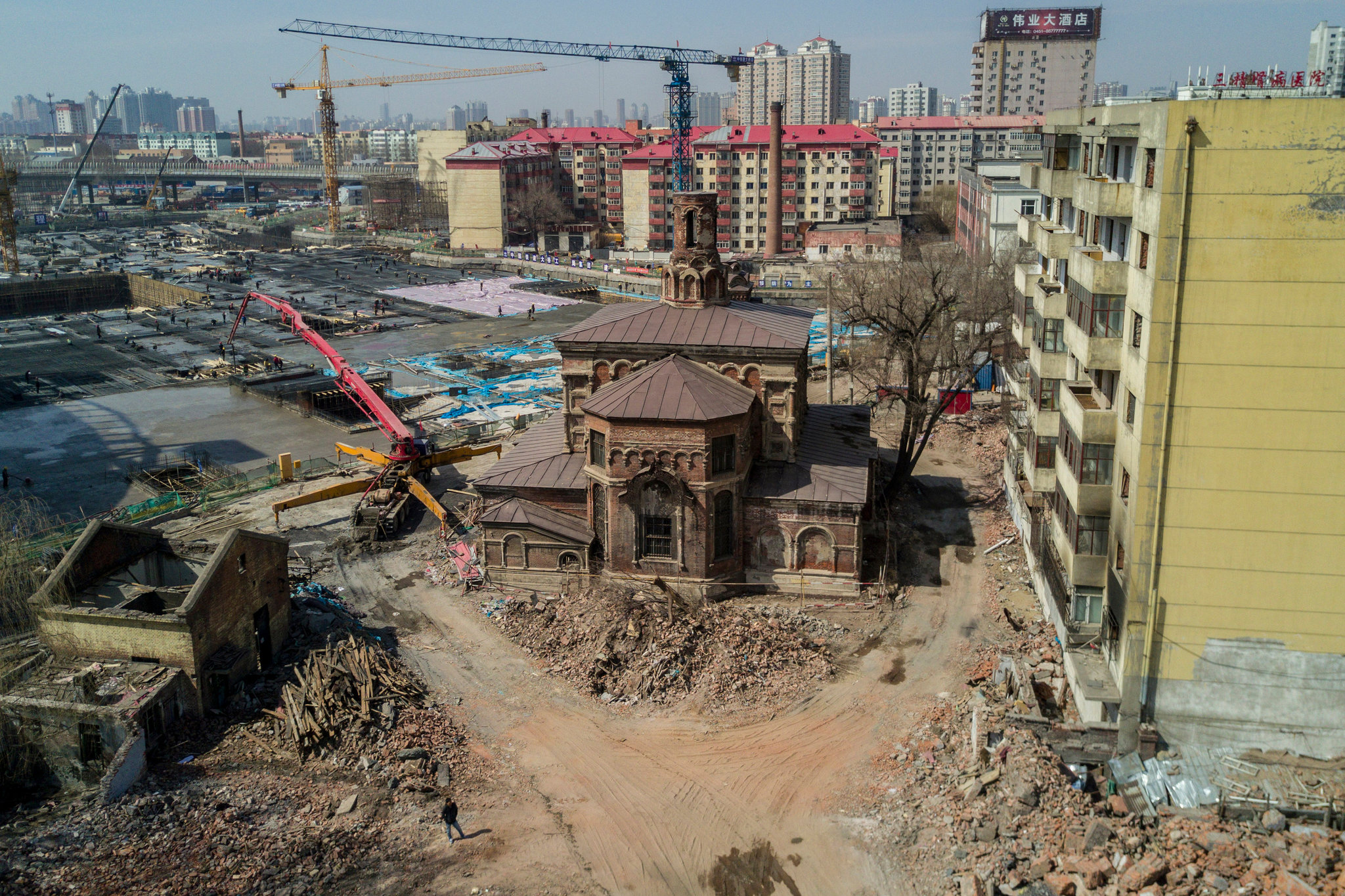 The Holy Iveron Icon Church, a dilapidated Russia Orthodox church from 1908, surrounded by construction for a new railway station in Harbin. CreditGilles Sabrié for The New York Times

This was not the first time Ms. Gao faced the possible destruction of a city landmark. In 2014, she started researching and writing about the remaining older structures on WeChat, the social messaging platform. One three-story building, now a jewelry store, used to house the United States Consulate. Another, home to a Russian businessman, was seized by Japanese soldiers in the 1930s who turned its basement into a prison.

That developed into a blog called “Uncovering Harbin’s Mysteries,” with stories about more than 60 sites. An online discussion group formed. It now has about 100 members, many of them local architects, artists and scholars who sometimes meet to consider what actions they can take to preserve Harbin’s distinctive architecture and culture. One of their gathering places is the Lucia restaurant, whose owner, Hu Hong, an architect born to a Russian mother and Chinese father, is an active member of the preservationists’ circle.

The street where Mr. Hu grew up was once lined with villas. But starting in the 1980s, with the introduction of a market-based economy and real estate speculation, he said, “the demolition began.”

“It was economic reform and opening up, and construction began on a massive scale,” Mr. Hu said at his restaurant, whose wooden ceiling and wall panels he carved himself, a skill he mastered when he was sent to the countryside to work as a teenager in the 1970s. “They said we needed to build more apartments, because we didn’t have enough housing, but the quality of those new apartments is so shoddy.” 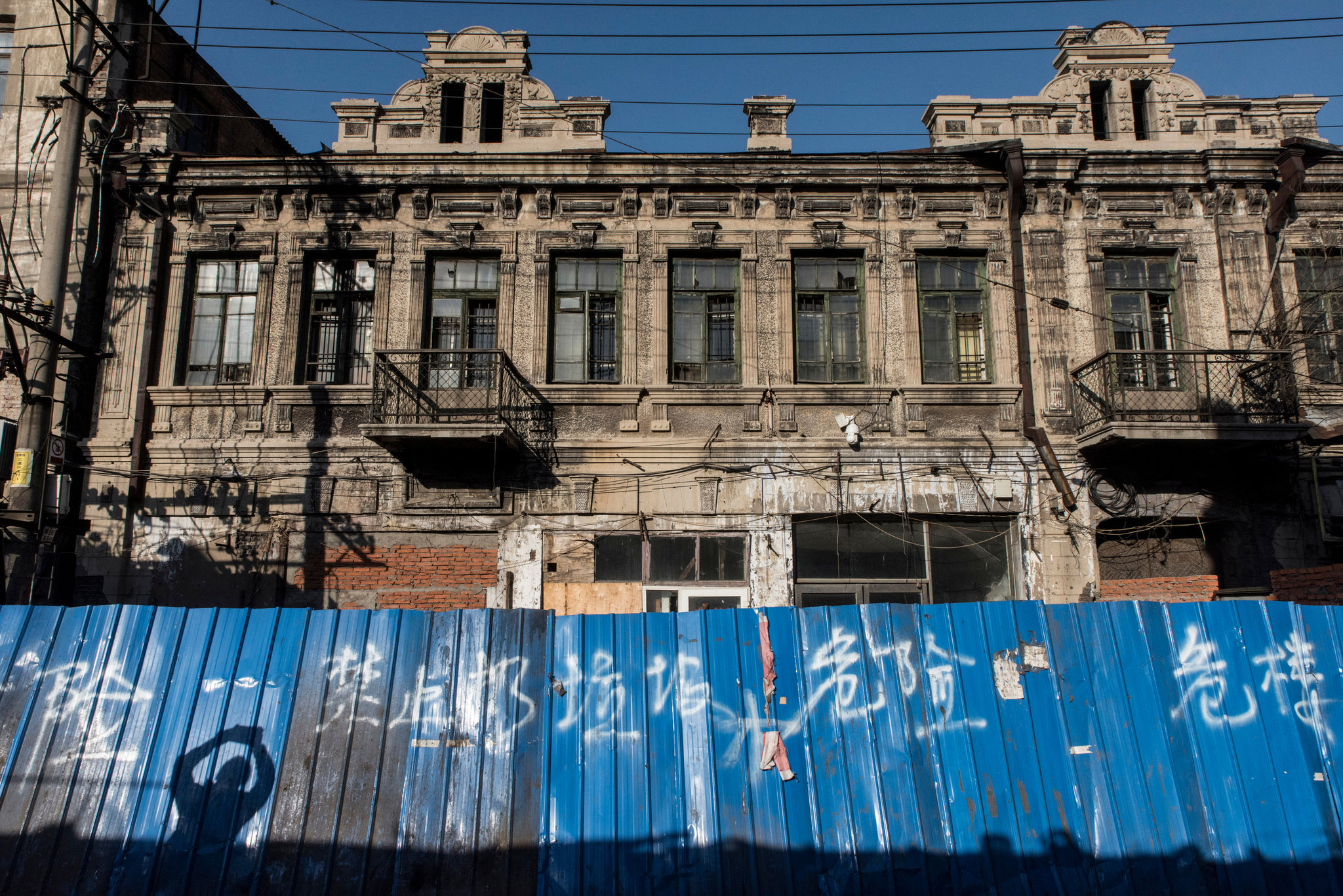 An early-20th-century building in the Lao Daowai neighborhood, where many older structures have been torn down and replaced with new structures that mimic the old style.CreditGilles Sabrie for The New York Times

The making of Harbin is like no other Chinese city. In 1898, Russian engineers and workers from both Russia and China came to build the Chinese Eastern Railway. They were soon followed by Russian Jews fleeing pogroms, and then aristocrats driven out by the Bolshevik Revolution and White Russian troops seeking refuge after defeat in civil war.

By the 1920s, more than 100,000 Russians had settled in Harbin, along with thousands more representing at least 50 nationalities. The city become a major economic center, with broad boulevards, onion-domed Orthodox churches, villas, department stores and hotels. The new settlers established hospitals, banks and theaters; published newspapers; and founded ballet troupes and orchestras.

Chinese were also drawn to Harbin, first to help build the railway and later for business. Some set up shops and factories and became successful entrepreneurs. Borrowing designs from their foreign neighbors, many built stone houses with European exteriors and Chinese-style interior courtyards — a style local residents commonly call “Chinese baroque.”

The first major remaking of Harbin occurred soon after the Communists came to power. When Mao Zedong visited Harbin in 1950, he declared that it should be transformed from a consumption-based city to a production-dominated one. The central government made Harbin an industrial base and built large factories and Soviet-style apartment blocks. 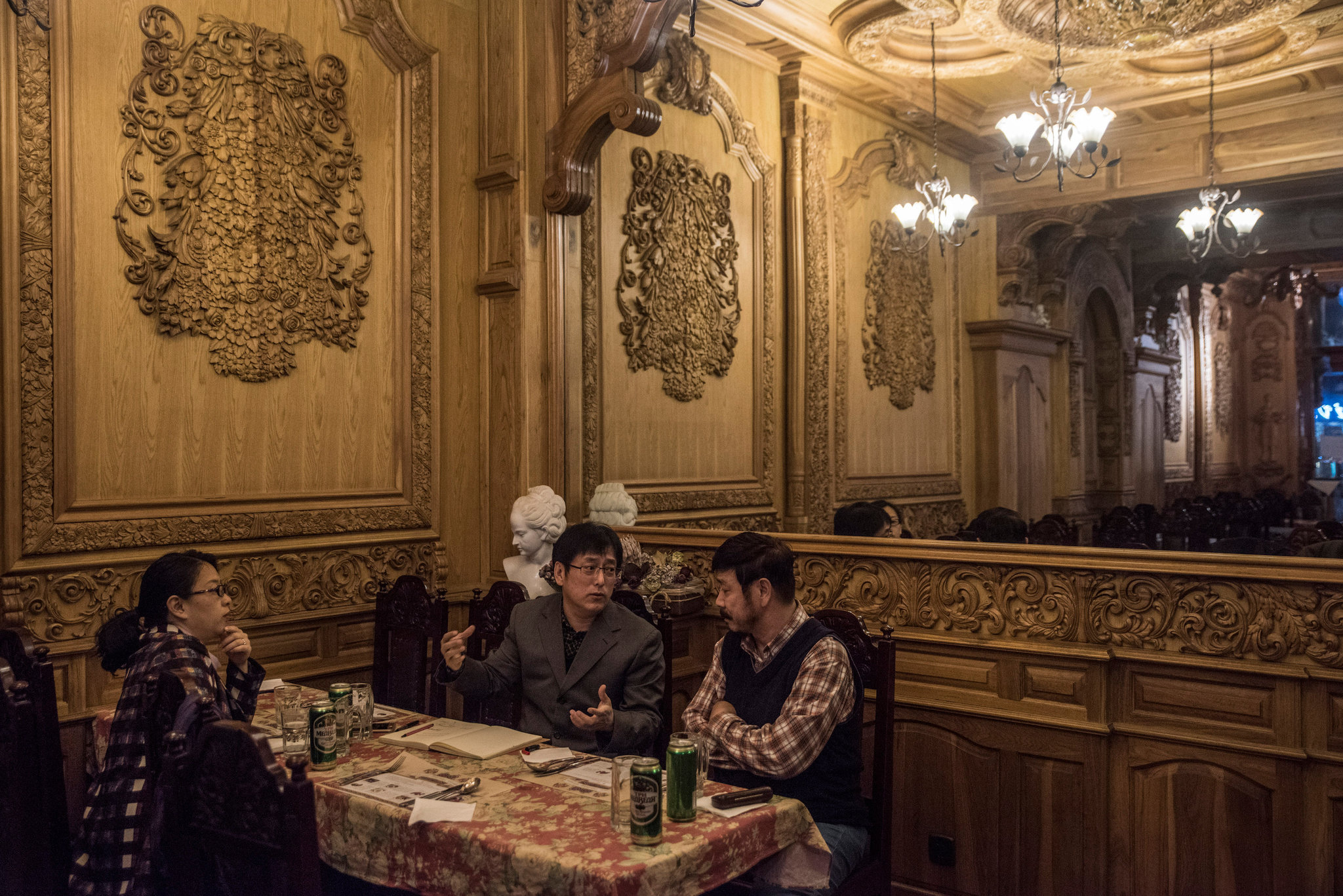 Local residents trying to preserve Harbin’s historic architecture include, from left, Gao Hong, a businesswoman; Bu Chong, a professor of architecture; and Hu Hong, an architect and restaurant owner CreditGilles Sabrié for The New York Times

Then, during the Cultural Revolution in the 1960s, about 80 percent of the city’s roughly 50 synagogues and churches were demolished by Red Guards, including the grand wooden Orthodox cathedral, St. Nicholas, built in 1900.

It is only in recent years that the local government, finally realizing that the city’s unique architecture could attract tourists, began renovating some of the surviving older buildings. Now, the city takes pride in St. Sophia Cathedral, which has been preserved as a museum, and the Russian buildings along the Central Boulevard. One synagogue has been turned into a concert hall, and another into a Jewish museum.

But to local preservationists, those efforts have come too late, and in some cases are ill conceived.

In the Lao Daowai neighborhood, the city government has evicted the residents, torn down the old houses, replaced them with new buildings that mimic an old style and rented the structures out to commercial enterprises. 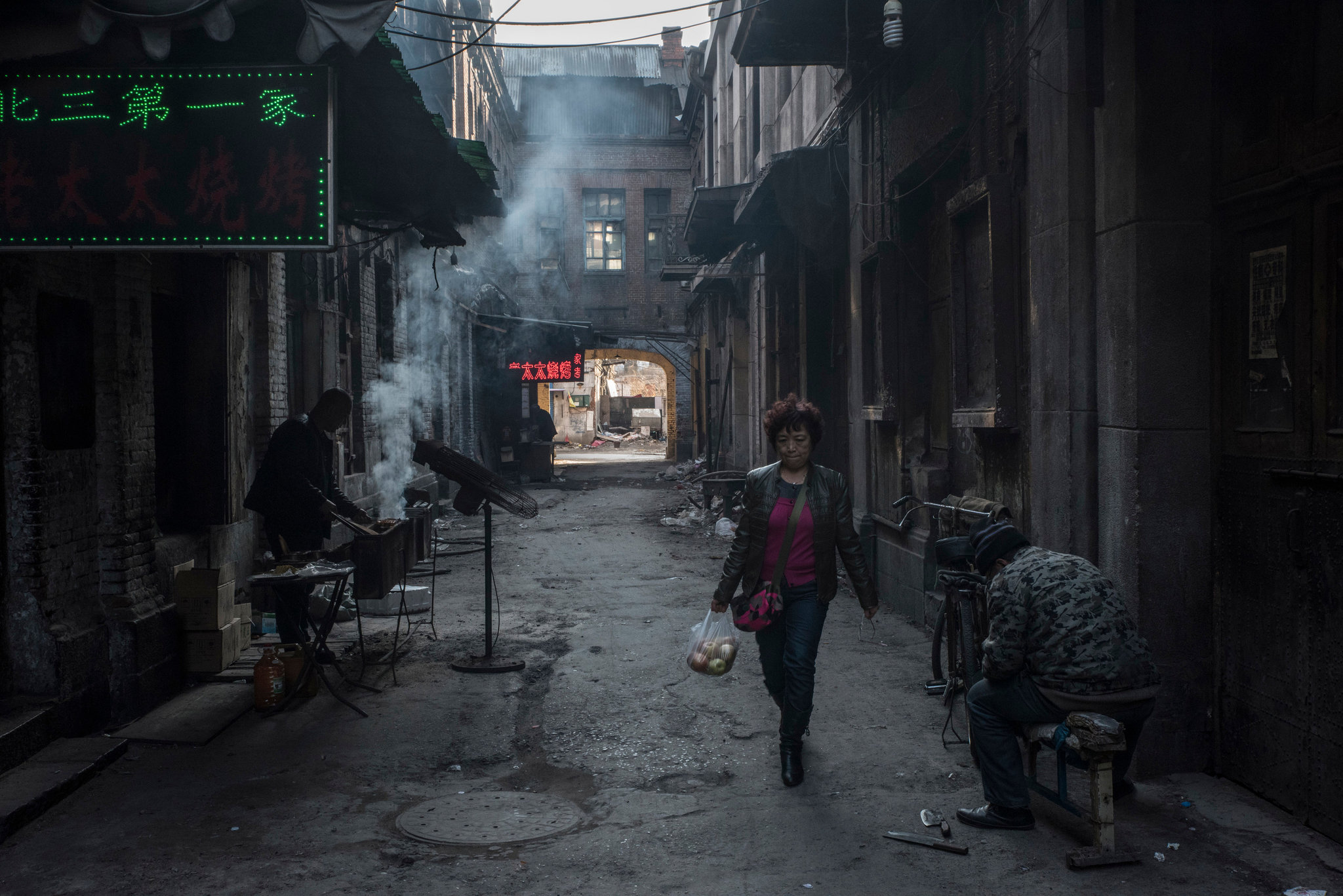 A vendor, left, preparing lamb skewers in a lane in Lao Daowai. Most residents in the lane have been moved out, and several buildings are to be demolished as part of a city renovation program. CreditGilles Sabrie for The New York Times

The project, which has counterparts in many other Chinese cities that have constructed new “old cities,” has been met with scorn from local preservationists who say it is absurd that the government is tearing down authentic older architecture and building imitations.

Evicting the old residents, and with them the popular restaurants and shops they ran, has destroyed the character of the district, they say.

“People have left, and shops are gone,” said Yin Haijie, a sociology professor at the Harbin Institute of Technology. “Cultural preservation means nothing to real estate developers and the government. Nothing is being considered but economic interests.”

Ms. Yin said the city lacked good channels for local scholars and preservationists to communicate with the government. “We are really disadvantaged,” she said. “The government is strong and society is weak.”

On a recent afternoon, workers were drilling into Jihong Bridge’s concrete walkways. The bridge’s four obelisks and the carved lion heads that have stood sentinel for nearly a century glistened in the sun.

“We have tried,” Ms. Gao said. “In the end we might be powerless, but we are still trying our best.”