Some stories include hundreds of chapters, and fans are willing to pay for access to these fantastical journeys 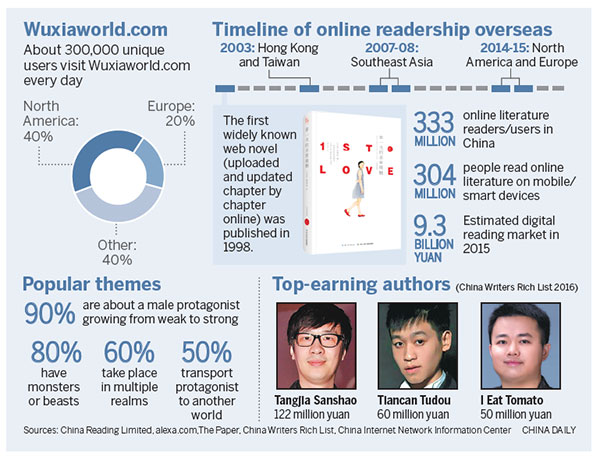 Both study magic in school, wield it in battles and transform from vulnerable students into super sorcerers.

But Linley Baruch is not Harry Potter.

The story of “the descendant of once-glorious Dragonblood Warriors (now) rising from weak to strong” has attracted millions of English-language readers after volunteer netizens translated it. The Web user “I Eat Tomato”, whose real name is Zhu Hongzhi, is the online novel’s author.

Many overseas readers－mostly from the United States and Canada－have proved willing to invest more than a year poring over the novel’s 853 chapters, discovering a world where “the strong live like royalty; the weak strive to survive another day”.

They learn such Chinese terms as dantian (where strength and energy gather in the body), qi (an internal energy) and xianxia (fantasy and kung fu novels).

And many have subsequently become interested in reading more Chinese literature.

Over 700 Chinese web novels that have been translated－at least partially－are listed on novelupdates.com, a guide to translated Asian literature. There are over 100 websites and online forums for such volunteers in North America.

One of the largest sites is wuxiaworld.com, which hosts the English version of Coiling Dragon.

It received 3.2 million monthly visits from over 110 countries and regions as of April 21. It garnered over 1 billion hits in the 21 months after it was founded in December 2014, said its owner, Jingping Lai, a Chinese-American widely known online as RWX.

“Story kept me on the edge of my seat … wanting to know what came next.”

Wuxiaworld user “diegodeveze” said: “I’m still feeling sad to see it end. I can’t believe I spent almost a year reading this. I really got quite attached to it, and I can say without qualms that I enjoyed it thoroughly.”

“Philbilly”, a self-proclaimed “simple man from central Kentucky－so me learning Chinese isn’t ever gonna happen”, enjoys “the first web novel or whatever you call it that I’ve read”.

“Simba6” said Chinese web novels’ “positive energy” helped him move beyond despair after he broke up with his girlfriend.

He became instantly popular in China last month when the Guangzhou-based Southern Weekly newspaper identified him as US software engineer and kung fu fan Kevin Cazad. The media outlet interviewed him and reported that it confirmed the story he had posted on wuxiaworld.

The Chinese online novels Stella Transformations, I Shall Seal the Heavens and Against the Gods are popular with large readerships who can read English though it is not their native language.

Some rank the phenomenon among the “world’s four new cultural wonders”. The others are Hollywood films, Japanese anime and manga and South Korean TV series.

Peking University literature professor and critic Shao Yanjun, who has studied the development and internationalization of China’s online literature with a team of students since 2010, said English-language readers’ fascination with Chinese web novels is “reminiscent of the golden age of splendid histories and imposing chronicles”.

Chinese web novels have continued their upward momentum since the genre appeared about 20 years ago, she said.

Some turn to Chinese online literature after following the country’s kung fu films and TV shows.

Others are introduced by friends or randomly discover the websites while surfing the web.

And some still start with printed translations of Chinese fiction before migrating to the internet.

Many printed Chinese martial-arts novels’ English translations were acclaimed, such as Louis Cha’s The Deer and the Cauldron. Tomb-robber fantasy Cavern of the Blood Zombies was an international hit after it was translated in 2011.

Chinese online fiction has been popular in Southeast Asia since the early 2000s. Vietnam alone translated 841 titles from 2009-13, over 70 percent of which are web novels, Beijing Foreign Studies University professor and literature critic He Mingxing said.

What is unique about the internationalization of China’s online literature is that armies of online volunteer translators and crowdfunding sponsors propel it.

In the beginning some western readers use Google.com’s robot translation service to help read the Chinese novels. Then the volunteer translators appeared on online forums. Some of the translators can’t read Chinese, but the passion to read and translate to share so great, they tried to translate from the novels’ translated versions in other languages, say Vietnamese.

They operate in the same way Chinese online novels are written－chapter-by-chapter and for crowdfunded donations.

Chinese readers get the first few chapters for free and then decide if they want to pay for future chapters, often yet unwritten.

Half of the 20 foreign readers from 18 countries cited in a small Southern Weekly survey had sponsored translators. And 80 percent said they would be willing to pay an average of $33 per novel.

The group is one of the oldest and largest in the field. It has 600 million registered user accounts and its over 4 million online writers have created 10 million works.

It has sold the copyrights of 200 online titles in 20 countries.

The most popular English-language genres are fantasy, personal growth and martial arts.

The group has been actively working to expand its international readership.

It brought 20 writers to meet fans in Singapore this month and participated in the London Book Fair in March. It plans to launch the English-language webnovel.com next month, followed by French, Spanish, Russian, Thai and Arabic equivalents.

“The charm of Chinese culture－its thousands of years of rich legends and history－has built a solid foundation for web novels’ allure,” Wu said.

“There are abundant stories created by the countless minds with original ideas.”

While the group is courting new readers abroad, most of its growth has come from target consumers searching for its products.

“They like the same things as domestic readers,” Wu said.

“So, we don’t need to create new things to appeal to them.”

Some foreign readers express their enthusiasm by writing their own web novels that mimic the Chinese genre.

Tina Lynge, 26, quit her teaching job to write. The Danish author has penned over 40 Chinese web novels and created her first web novel of which even the protagonists use pinyin names.

She is posting new chapters of Blue Phoenix, a tale about how Hui Yue makes it in a world of survival of the fittest, on the website gravity-tales.com. The site hosts six comparable web novels.

Blue Phoenix has over 300 ratings on goodreads.com and is published as an Amazon e-book.

She told China Art newspaper she was amazed by the world the Chinese have created from their legends and culture. And she is “inspired” by the moral the online novels convey－success from persistence.

Peking University’s Shao said the novels have flourished because they meet a demand for popular fiction in China.

She predicted Amazon, and TV, film and game adaptations will accelerate their development.