Population and Location of the Bai Ethnic Minority

History of the Bai 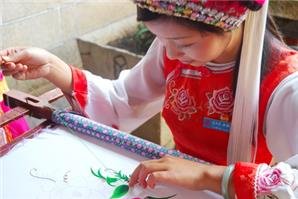 Today, Bai people wear bright clothing in coordinating colors. The fabric and embroidery used is delicate. Many pieces of Bai clothing will have a camellia flower represented on it. This flower symbolizes beauty. Often, a red scarf and a white outer layer will be worn to resemble a blooming camellia.

Many Bai people prefer the color white. This is because white signifies a high social status as well as dignity. Typically, white is seen somewhere on the clothing of a Bai person. Men often wear a white outer layer and white pants. Women tend to wear more colorful clothing than men, but white is always an element of their outfit. Most Bai females will wear a white, pink or light blue outer layer and a dark pink, purple or pink waistcoat.

If a girl is unmarried, she’ll wear her hair in a ponytail. Her hair will have a red string tied around the end of it. The string will also coil around the girl’s head. Most unmarried women will wear an embroidered apron.

Pork is the center of the Bai diet. Several types of pork are cooked, including ham, sausage, and smoked pig liver and intestines. In the wintertime, Bai people eat beef soup that also contains radishes, shallots, and turnips. The Bai people who live close to a lake or river often have a lot of fish in their diet, and they’re adept at preparing fish in a variety of ways.

Bai people eat a lot of vegetables and pickles. Bai women are skilled at making all sorts of pickles and sauces. Common sauces include bean sauce, lobster sauce and flour sauce. The Bai people who live in Heqing and Jiangchuan tend to cook different kinds of dishes. They’ll often use pickled seaweed from the Erhai Lake in their cooking.

Most Bai people drink tea twice a day, every day. Tea is consumed in the morning and during the afternoon. Morning tea, also called “wakening tea”, is consumed immediately upon waking. The afternoon tea is called either relaxing tea or thirst satisfying tea. Some Bai people choose to add either milk or popcorn to their tea.

During the sandao tea ceremony, baked tea is served. Large tea leaves or xiaguan tea is placed into a tiny pot and baked over a charcoal fire. The pot has to be continuously shaken so that the tea leaves don’t burn. As soon as the tea makers smell the fragrant tea, boiled water is poured into the teapot. A little while later, more boiled water is added to the teapot and the tea is served.

The Bai people are extremely hospitable. All guests are received warmly and treated well. A full cup of wine is offered to guests, but guests aren’t forced to drink the wine. Instead, they can drink as much or as little as they want.

The Bai population also honors the elderly. Young Bai people always greet elderly Bai people and offer their seat, tea, and a cigarette. It’s a sign of disrespect to cross your legs when sitting in front of an elderly Bai person. The first cup of tea served during the day is given to the oldest person. The most senior Bai person also always takes the head seat at the table and starts eating first. 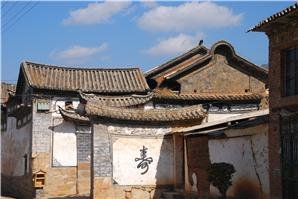 There are two basic types of Bai homes: the Sanfang Yizhaobi, which has a courtyard in the center, rooms on three sides of the courtyard and a wall that reflects light on the fourth side. There’s also the Sihe Wutianjing home, which is a set of four different houses, each one on the corner of a large, center courtyard. 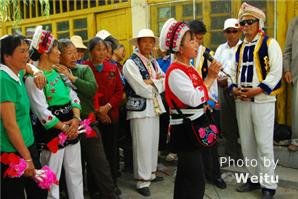 The Torch Festival: the 25th of the sixth lunar month in Bai villages in Dali, such as Zhoucheng Bai village

Folk Song Singing Festival at Shibaoshan Mountain: from the 27th of the seventh month to the third of the eighth month of the Chinese traditional calendar in Dali.