Lü Dongbin (呂洞賓, born 796) was a Tang Dynasty Chinese scholar and poet who has been elevated to the status of an immortal in the Chinese cultural sphere, worshipped especially by the Taoists.

His name is Lü Yán, with Yán (岩) being the given name. Dòngbīn is his courtesy name. He is called Master Pure-Yang (純陽子), and is also called Lü the Progenitor (呂祖) by some Daoist, especially those of the Quanzhen School. 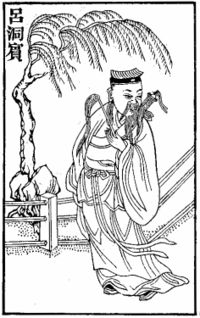 When he was born, a fragrance allegedly filled the room. His birthday is said to be on the fourteenth day of the fourth month of the Chinese calendar. He had been very intelligent since childhood and had many academic achievements. However, according to one story, still unmarried by the age of 20, Lü twice took the top-level civil service exam to become a government official, but did not succeed.

The legend has it that one night when Lü Yan was in Chang’an or Handan, he dozed off as his yellow millet was cooking in a hotel. He dreamed that he took the imperial exam and excelled, and thus was awarded a prestigious office and soon promoted to the position of vice minister (侍郎). He then married the daughter of a prosperous household and had a son and a daughter. He was promoted again and again, and finally became the prime minister. However, his success and luck attracted jealousy of others, so he was accused of crimes that caused him to lose his office. His wife then betrayed him, his children were killed by bandits, and he lost all his wealth. As he was dying on the street in the dream, he woke up.

A story has it that when in Chang An, Lü was tested by the immortal Zhongli Quan ten times before Quan took him in as a disciple and Lü subsequently became immortal. These ten trials are described below.

Another day Lü came back to his house and saw that he had been burglarized and lost all his belongings. Without becoming angry he started to work on his farm. As he dug into the ground he found countless pieces of gold. He uncovered the earth without taking a single piece of the gold.

Once Lü was alone at home and suddenly weird things happened. Ghost and monsters were killing each other and wanted to do the same to Lü. Showing no sense of fear, Lü kept on doing his chores without paying attention to them. Another group of devils with blood all over them tried to take Lü’s life away by saying to Lü that he owed his previous life to them since in past life Lü took his life. Without any fear Lü said ‘go ahead and take my life since I took yours in past life, this is fair and square !’ All of a sudden the sky turned blue and those ghost and devils disappeared. Zhongli Quan (Who happened to be his Teacher and Mentor in Taoist stories) was looking and laughing at him while all these events were happening.

These 10 tests proved that Lü was a pure and dignified person and Master Zhongli was very satisfied and happy to take Lü to Nan San Her Ling to pass his secret to life and subsequently formed a “Zhong-Lü Golden Dan” school of Taoism. But Lü was not too fond of the secret and instead changed his formula for inner peace and benefits more human beings; many until today practiced such path to immortals.

The kindness of Lü Dongbin is demonstrated in the Chinese proverb “dog bites Lü Dongbin” (狗咬呂洞賓), which means an inability to recognize goodness and repay kindness with vice. Some say that the original proverb should actually be “狗咬呂洞賓，不識好人心,” stemming from a story about the friendship between Gou Miao (狗咬) and Lü Dongbin, who both did for the other great favors, each of which seemed like a disservice initially, signifying the importance of having faith in one’s friends.

One of most popular of Lü Dongbin’s legends is his encounter with a prostitute named White Peony (Bai Mudan). The most popular version comes from the Journey to the East novel. It is said that the immortal Lü Dongbin was greatly attracted to White Peony, one of the most beautiful courtesans in Luoyang. Lü Dongbin slept with her many times but never ejaculated, because he didn’t want to lose his Yang essence. Unfortunately Lu’s immortal colleague Iron-Crutch Li and He Xiangu taught Mudan how to make him ejaculate by tickling his groin. Finally White Peony successfully made Lü Dongbin ejaculate and absorbed his Yang essence. Later she cultivated herself and became immortal too.

Lü Dongbin is usually portrayed as a scholarly, clever man with a genuine desire to help people obtain wisdom/enlightenment and to learn the Tao. However, he is often portrayed as having some character “flaws”, not an uncommon theme for the colorful Taoist immortals, all of whom in general have various eccentricities: