The Eight Immortals (八仙) are a group of legendary immortals in Chinese mythology. Each immortal’s power can be transferred to a power tool (法器) that can bestow life or destroy evil. Together, these eight tools are called the “Covert Eight Immortals” (暗八仙). Most of them are said to have been born in the Tang or Song dynasty. They are revered by the Taoists and are also a popular element in the secular Chinese culture. They are said to live on a group of five islands in the Bohai Sea, which includes Penglai Mountain-Island. 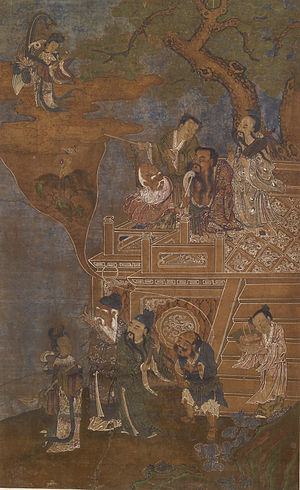 In literature before the 1970s, they were sometimes translated as the Eight Genies. First described in the Yuan Dynasty, they were probably named after the Eight Immortal Scholars of the Han.

According to the legendary stories Xian Fo Qi Zong (仙佛奇蹤), He Xian’gu was the daughter of He Tai (何泰), a man from Zengcheng District, Guangzhou, Guangdong. At birth, she had six long hairs on the crown of her head. When she was about 14 or 15, a divine personage appeared to her in a dream and instructed her to eat powdered mica so that her body might become etherealised and immune from death. She did as instructed and also vowed to remain a virgin. She also gradually decreased her food intake.

Cao Guojiu is believed to be a descendant of Cao Bin, a general of the early Song dynasty, and a younger brother of Empress Cao. Cao’s younger brother, Cao Jingzhi (曹景植), abused his relationship with the imperial family by bullying others and engaging in corrupt practices. Cao tried to persuade his brother to change his ways but he did not listen. In the meantime, he also used his family fortune to help the poor and tried to make up for his brother’s misdeeds.

Li Tieguai is sometimes described as irascible and ill-tempered, but also benevolent to the poor, sick and the needy, whose suffering he alleviates with special medicine from his gourd. He is often portrayed as an ugly old man with dirty face, scraggy beard, and messy hair held by a golden band. He walks with the aid of an iron crutch and often has a gourd slung over his shoulder or held in his hand. He often is depicted as a clown figure who descends to earth in the form of a beggar who uses his power to fight for the oppressed and needy.

Lü Dongbin is usually portrayed as a scholarly, clever man with a genuine desire to help people obtain wisdom/enlightenment and to learn the Tao. He is also portrayed as having bouts of drunkenness, which was not uncommon among the often fun-loving Eight Immortals. This also parallels several Taoist artists renowned for their love of drinking.

The tradition of depicting humans who have become immortals is an ancient practice in Chinese art, and when religious Taoism gained popularity, it quickly picked up this tradition with its own immortals. While cults dedicated to various Taoist immortals date back to the Han dynasty, the popular and well-known Eight Immortals first appeared in the Jin dynasty. The art of the Jin tombs of the 12th and 13th centuries depicts a group of eight Taoist immortals in wall murals and sculptures. They officially became known as the Eight Immortals in the writings and works of art of the Taoist group known as the Complete Realization (Quanshen). The most famous art depiction of the Eight Immortals from this period is a mural of them in the Eternal Joy Temple (Yongle Gong) at Ruicheng.

The 8 Immortals are considered to be signs of prosperity and longevity, so they are popular themes in ancient and medieval art. They were frequent adornments on celadon vases. They were also common in sculptures owned by the nobility. Their most common appearance, however, was in paintings. Many silk paintings, wall murals, and wood block prints remain of the Eight Immortals. They were often depicted either together in one group, or alone to give more homage to that specific immortal. 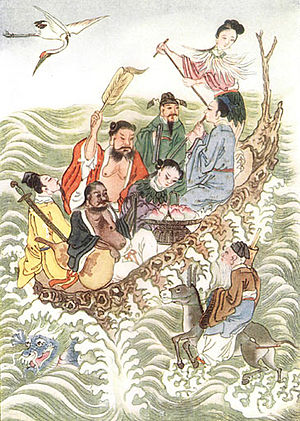 There is another work, also made during the Ming (c. 14th-15th centuries), by an anonymous writer, called The Eight Immortals Cross the Sea (八仙過海). It is about the Immortals on their way to attend the Conference of the Magical Peach (蟠桃會) when they encounter an ocean. Instead of relying on their clouds to get them across, Lü Dongbin suggested that they each should exercise their unique powers to get across. Derived from this, the Chinese proverb “The Eight Immortals cross the sea, each reveals its divine power” (八仙過海，各顯神通) indicates the situation that everybody shows off their skills and expertise to achieve a common goal.

The artwork of the Eight Immortals is not limited to paintings or other visual arts. They are quite prominent in written works too. Authors and playwrights wrote numerous stories and plays on the Eight Immortals. One famous story that has been rewritten many times and turned into several plays (the most famous written by Mu Zhiyuan in the Yuan Dynasty) is The Yellow-Millet Dream, which is the story of how Lǚ Dòngbīn met Zhongli Quan and began his path to immortality.