West Lake (西湖) is a freshwater lake in Hangzhou, the capital of Zhejiang province in eastern China. It is divided into five sections by three causeways. There are numerous temples, pagodas, gardens, and artificial islands within the lake.

West Lake has influenced poets and painters throughout Chinese history for its natural beauty and historic relics, and it has also been among the most important sources of inspiration for Chinese garden designers. It was made a UNESCO World Heritage Site in 2011, described as having “influenced garden design in the rest of China as well as Japan and Korea over the centuries” and reflecting “an idealized fusion between humans and nature”. 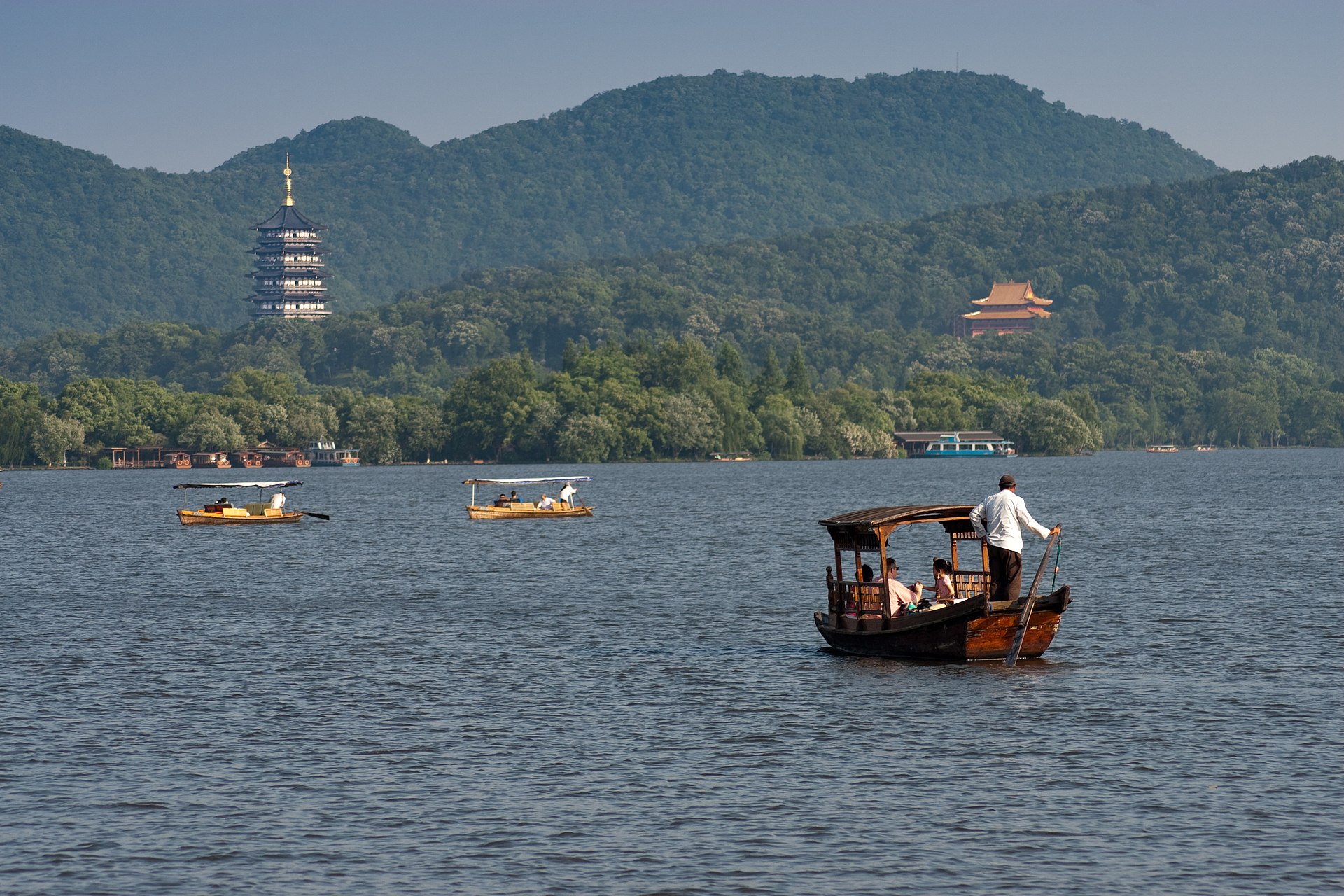 Over 2,000 years ago, West Lake was still a part of the Qiantang River. Due to soil sedimentation, the feet of Wu Mountain and Baoshi Mountains, the surrounding mountains on the northern and southern sides of the lake, gradually stretched to form shoal heads. Later, these sand spits slowly merged to into a bank, to which a lagoon emerged to the west; this was the old West Lake of the Qin and Han dynasties. “West Lake Dream Searching” (西湖夢尋), written by Zhang Dai, relates the story that Qin Shi Huang visited the area and moored his boat to a stone later developed into the Big Stone Buddhist Temple. The stone was located on Baoshi Mountain, north of the West Lake, and can still be seen. 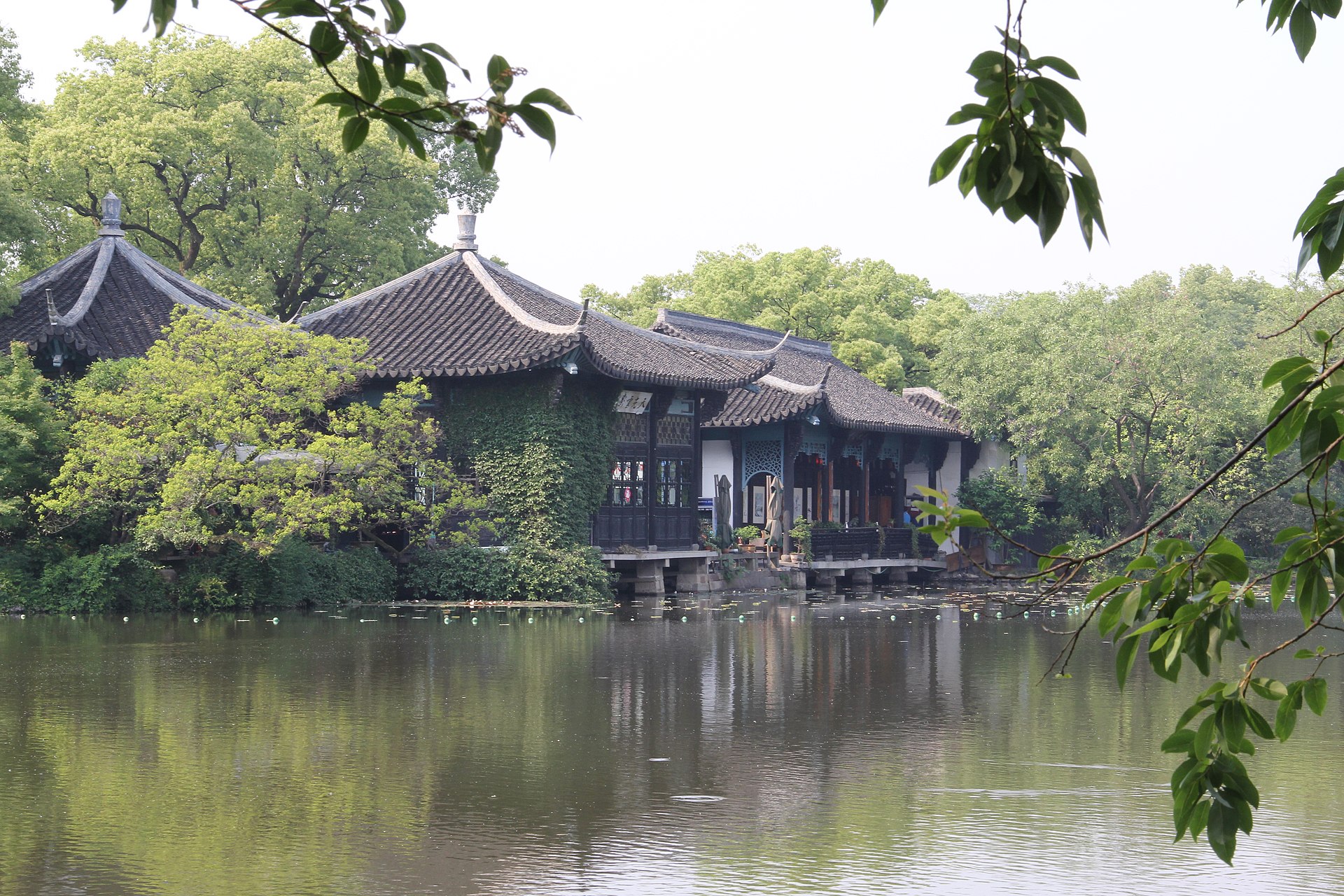 Over the centuries, the beauty and culture of West Lake has attracted numerous literati, who left behind works of literature and poetry to describe the lake. For example, Dream in West Lake and The Enchiridion of Lake and Mountain recorded a lot about West Lake and ancient Hangzhou historic anecdotes. Poets such as Bai Juyi, Su Shi, Xu Zhimo and Hu Shih also wrote countless poems about West Lake. The Chinese legend Legend of the White Snake is also set in West Lake in Hangzhou and has been adapted into films and television series over the years. 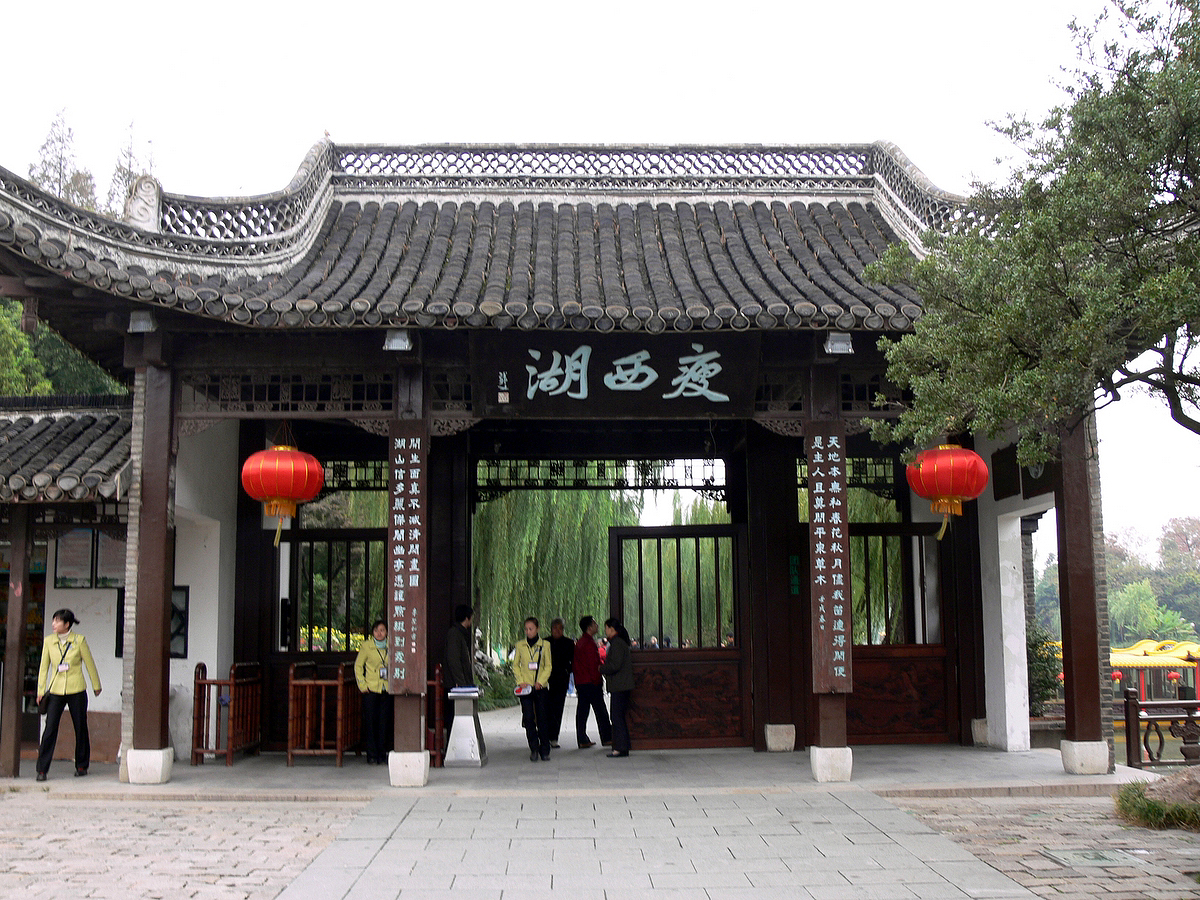 A long bank planted with weeping willows spans the lake; at its midpoint stands a square terrace with pavilions at each of the corners and one in the center. Around the lake is a park in which are found several attractions: Lotus Flower Pagoda (Lianhua SO, a white structure reminiscent of the White Pagoda (Baita) in Beijing‘s Beihai Park; Small Gold Mountain (Xiao Jin Shan); and the Fishing Platform (Diaoyutai), a favorite retreat of the Qianlong Emperor. The emperor was so gratified by his luck in fishing at this spot that he ordered additional stipends for the town. As it turns out, his success had been augmented by local swimmers who lurked in the lake busily attaching fish to his hook.

The Slender West Lake’s southern end is near the northwestern corner of Yangzhou’s historic city center (the former walled city). From this point, the Erdaohe Canal runs south, along the western edge of the former walled city to the Hehuachi (“Lotus Pond”) at the old city’s southwest corner; the Hehuachi is in its turn connected by the short Erdaogou Canal with the Old Grand Canal of China.

9 things you may not know about Start of Spring