Qu Yuan (c. 340–278 BC) was a Chinese poet and minister who lived during the Warring States period of ancient China.

During King Qingxiang’s reign, Prime Minister Zilan slandered Qu Yuan.This caused Qu Yuan’s exile to the regions south of the Yangtze River. It is said that Qu Yuan returned first to his home town. In his exile, he spent much of this time collecting legends and rearranging folk odes while traveling the countryside. Furthermore, he wrote some of the greatest poetry in Chinese literature and expressed deep concerns about his state.

Qu Yuan is regarded as the first author of verse in China to have his name associated to his work, since prior to that time, poetic works were not attributed to any specific authors. He is considered to have initiated the so-called sao style of verse, which is named after his work Li Sao, in which he abandoned the classic four-character verses used in poems of Shi Jing and adopted verses with varying lengths. This resulted in poems with more rhythm and latitude in expression. Qu Yuan is also regarded as one of the most prominent figures of Romanticism in Chinese classical literature, and his masterpieces influenced some of the greatest Romanticist poets in Tang Dynasty such as Li Bai. During the Han Dynasty, Qu Yuan became established as a heroic example of how a scholar and official who was denied public recognition suitable to their worth should behave.

In China, Qu Yuan came to be regarded as a prime example of patriotism. His social idealism and unbending patriotism have served as the model for Chinese intellectuals to this day, particularly following the establishment of new China in 1949. For example, in the 1950s China issued a postage stamp bearing an image of Qu Yuan. 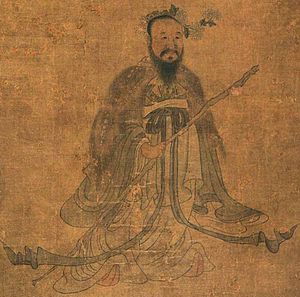 Popular legend has it that villagers carried their dumplings and boats to the middle of the river and desperately tried to save Qu Yuan after he immersed himself in the Miluo but were too late to do so. However, in order to keep fish and evil spirits away from his body, they beat drums and splashed the water with their paddles, and they also threw rice into the water both as a food offering to Qu Yuan’s spirit and also to distract the fish away from his body. However, the legend continues, that late one night, the spirit of Qu Yuan appeared before his friends and told them that he died because he had taken himself under the river. Then, he asked his friends to wrap their rice into three-cornered silk packages to ward off the dragon.

These packages became a traditional food known as zongzi, although the lumps of rice are now wrapped in leaves instead of silk. The act of racing to search for his body in boats gradually became the cultural tradition of dragon boat racing, held on the anniversary of his death every year. Today, people still eat zongzi and participate in dragon boat races to commemorate Qu Yuan’s sacrifice on the fifth day of the fifth month of the traditional lunisolar Chinese calendar. The countries around China, such as Vietnam and Korea, also celebrate variations of this Dragon Boat Festival as part of their shared cultural heritage.