The Mid-Autumn Festival is a harvest festival celebrated by ethnic Chinese and Asian (esp. Vietnamese) people.

The festival celebrates three fundamental concepts which are closely tied to one another:

A notable part of celebrating the holiday is the carrying of brightly lit lanterns, lighting lanterns on towers, or floating sky lanterns. 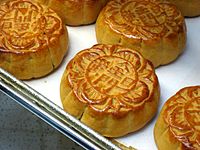 Making and sharing mooncakes is one of the hallmark traditions of this festival. In Chinese culture, a round shape symbolizes completeness and reunion. Thus, the sharing and eating of round mooncakes among family members during the week of the festival signify the completeness and unity of families.

The Mid-Autumn moon has traditionally been a choice occasion to celebrate marriages. Girls would pray to Chang’e,known as the Moon Goddess of Immortality, to help fulfill their romantic wishes.

In some parts of China, dances are held for young men and women to find partners. For example, young women are encouraged to throw their handkerchiefs to the crowd, and the young man who catches and returns the handkerchief has a chance at romance.In Daguang, in northeast Guizhou Province, young men and women of the Dong people would make an appointment at a certain place. The young women would arrive early to overhear remarks made about them by the young men. The young men would praise their lovers in front of their fellows, in which finally the listening women would walk out of the thicket. Pairs of lovers would go off to a quiet place to open their hearts to each other.