The complex topography of Sichuan including mountains, hills, plains, plateaus, and basin has shaped food customs in Sichuan with versatile and distinct ingredients.

Abundant rice and vegetables are produced from the fertile Sichuan Basin, whereas a wide variety of herbs, mushrooms and other fungi prosper in the highland regions. Pork is overwhelmingly the major meat. Beef is somewhat more common in Sichuan cuisine than it is in other Chinese cuisines, perhaps due to the prevalence of oxen in the region. Sichuan cuisine also utilizes various bovine and porcine organs as ingredients, such as intestine, arteries, head, tongue, skin, and liver, in addition to other commonly utilized portions of the meat. Rabbit meat is also much more popular in Sichuan than elsewhere in China. It is estimated that the Sichuan Basin and Chongqing area consume about 70 percent of China’s rabbit meat consumption.Yoghurt, which probably spread from India through Tibet in medieval times, is consumed among the Han Chinese. This is a custom unusual in other parts of the country. The salt produced from Sichuan salt springs and wells, unlike the sea salt, does not contain iodine, leading to goiter problems before the 20th century. 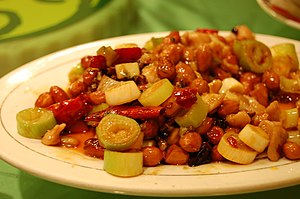 Broad bean chili paste (simplified Chinese: 豆瓣酱; traditional Chinese: 豆瓣醬; pinyin: dòubànjiàng) is one of the most important seasonings. It is an essential component to famous dishes such as Mapo tofu and double-cooked pork slices. Sichuan cuisine is the origin of several prominent sauces/flavors widely used in modern Chinese cuisine, including the garlic sauce/yuxiang (魚香), mala (麻辣), and guaiwei (怪味).

Common preparation techniques in Sichuan cuisine include stir frying, steaming and braising, but a complete list would include more than 20 distinct techniques.

Putting China’s potent national drink, the fiery Baijiu, back on the drinks list