Chinese culture (simplified Chinese: 中华文化; traditional Chinese: 中華文化; pinyin: Zhōnghuá wénhuà) is one of the world’s oldest cultures, tracing back to thousands of years ago. The area in which the culture is dominant covers a large geographical region in eastern Asia with customs and traditions varying greatly between provinces, cities, and even towns as well. Important components of Chinese culture include ceramics, architecture, music, literature, martial arts, cuisine, visual arts, philosophy and religion.

There are 56 officially recognized ethnic groups in China. In terms of numbers however, Han Chinese is by far the largest group.Throughout history, many groups have merged into neighboring ethnicities or disappeared. At the same time, m 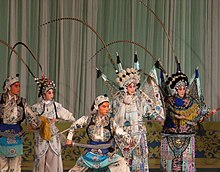 any within the Han identity have maintained distinct linguistic and regional cultural traditions. The term Zhonghua Minzu has been used to describe the notion of Chinese nationalism in general.[citation needed]Much of the traditional identity within the community has to do with distinguishing the family name.

Traditional Chinese Culture covers large geographical territories, where each region is usually divided into distinct sub-cultures. Each region is often represented by three ancestral items. For example, Guangdong is represented by chenpi, aged ginger and hay.Others include ancient cities like Lin’an (Hangzhou), whi

Most social values are derived from Confucianism and Taoism. Confucianism was the official philosophy throughout most of Imperial China’s history, and mastery of Confucian texts was the primary criterion for entry into the imperial bureaucracy. A number of more authoritarian strains of thought have also been influential, such as Legalism.

Chinese religion was originally oriented to worshipping the supreme god Shang Di during the Xia and Shang dynasties, with the king and diviners acting as priests and using oracle bones. The Zhou dynasty oriented it to worshipping the broader concept of heaven. A large part of Chinese culture is based on the notion that a spiritual world exists. Countless methods of divination have helped answer questions, even serving as an alternate to medicine. Folklores have helped fill the gap for things that cannot be explained. There is often a blurred line between myth, religion and unexplained phenomenon. While many deities are part of the tradition, some of the most recognized holy figures include Guan Yin, the Jade Emperor and Buddha.

Different forms of art have swayed under the influence of great philosophers, teachers, religious figures and even political figures. Chinese art encompasses all facets of fine art, folk art and performance art. Porcelain pottery was one of the first forms of art in the Palaeolithic period. Early Chinese music and poetry was influenced by the Book of Songs, and the Chinese poet and statesman Qu Yuan.

Chinese painting became a highly appreciated art in court circles encompassing a wide variety of Shan shui with specialized styles such as Ming Dynasty painting. Early Chinese music was based on percussion instruments, which later gave away to stringed and reed instruments. By the Han dynasty papercutting became a new art form after the invention of paper. Chinese opera would also be introduced and branched regionally in addition to other performance formats such as variety arts.

hinese architecture, examples for which can be found from more than 2,000 years ago, is almost as old as Chinese civilization and has long been an important hallmark of Chinese culture. There are certain features common to Chinese architecture, regardless of specific regions, different provinces or use. The most important is its emphasis on width, such as the wide halls of the Forbidden City serve as an example. In contrast, Western architecture tends to emphasize height.

Chinese Tea culture refers to how tea is 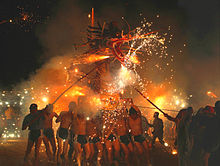 prepared as well as the occasions when people consume tea in China. Tea culture in China differs from that in European countries like Britain and other Asian countries like Japan in preparation, taste, and occasion wherein it is consumed. Even today, tea is consumed regularly, both at casual and formal occasions. In addition to being a popular beverage, tea is used in traditional Chinese medicine, as well as in Chinese cuisine. Green tea is one of the main worldwide teas originating in China.

The overwhelmingly large variety of Chinese cuisine comes mainly from the practice of dynastic period, when emperors would host banquets with over 100 dishes per meal.[11] A countless number of imperial kitchen staff and concubines were involved in the food preparation process. 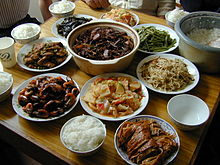 Over time, many dishes became part of the everyday-citizen culture. Some of the highest quality restaurants with recipes close to the dynastic periods include Fangshan restaurant in Beihai Park Beijing and the Oriole Pavilion. Arguably all branches of Hong Kong eastern style are in some ways rooted from the original dynastic cuisines.

A number of games and pastimes are popular within Chinese culture. The most common game is Mah Jong. The same pieces are used for other styled games such as Shanghai Solitaire. Others include pai gow, pai gow poker and other bone domino games. Weiqi and xiangqi are also popular. Ethnic games like Chinese yo-yo are also part of the culture where it is performed during social events. Qigong pronounced (Chi Kung) is the practice of spiritual, physical, and medical techniques. It is as a form of exercise and although it is commonly used among the elderly, any one of any age can practice it during their free time. With its combination of physical flexibility and movement, breathing technique, and constant state of focus and mediation, it has also been a way to cleanse and heal the body and helps get in touch with your inner-self. Qigong has continuous rhythmic movements that help reduce stress and build stamina as well as to improve certain functions of our body such as cardiovascular and digestive.